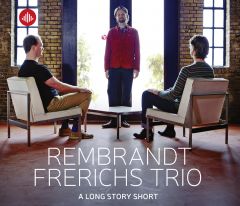 In 2014, the new album of pianist Rembrandt Frerichs is released on Challenge Records.

The title 'A Long Story Short' has always been a phrase that appealed to rembrandt's imagination and is also the title of one of the more cinematic pieces on this album. It is a phrase that, on multiple levels, speaks to the artistic development of this trio.

Rembrandt uses poetry-based rhythms, one of the many reasons why he loves the art music of the Middle East. Frerichs: "l often wondered why an Arabic 23/8 rhythm sometimes touches me more than straight ahead 4/4 time. i think it is because, like a line of poetry, its cadence invites you into a dancing, bouncing universe full of opportunities to change your perspective on your own musical language".
Even if their shared love for Middle Eastern music can hardly be heard literally on this album, it is an important compositional factor. “If I hadn’t spent many hours listening to the music of Kayhan Kalhor, Ahmet Meter, the Al-Kindi ensemble or the Ottoman masters, I would never have come to appreciate the rhythmic aesthetic of their part of the world. The challenge is of course to translate this aesthetic to the musical language of the modern creative piano trio. In this process I always try to keep in mind Mondriaans principal of trying to capture the essence of something by the abstraction of it.”

It is in the recording studio that a long story with many side-tracks needs to be edited down so it can be told in the timespan of an album. In just two days a number years of creative development is condensed into a short and clear message. “I am very happy with the way this worked out, but that doesn’t mean though, that the arrangements of these pieces are now set in stone. In fact, one of the goals of this working band is to continue to refine the performance of the pieces, trying new angles and letting different sides of the compositions reveal themselves.”