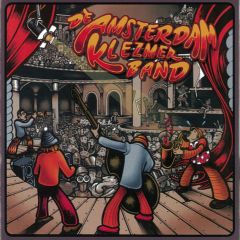 Chajes discovered his Jewish musical roots when busking during the early nineties. He had dropped out of college, and was busking to supplement his benefit money. The klezmer sound had become somewhat forgotten in Amsterdam, but people quickly warmed to it. Before long, his hat started to accumulate not only guilders but also the visiting cards of various parties and festivals. By this time, the repertoire already including the adventurous rhythms made popular by the Gypsy bands that also performed in Amsterdam.
1997 was the official year of birth of the Amsterdam Klezmer Band. They played as a quartet at the Oerol festival, at several liberation festivals and at street music festivals in Italy, Switzerland and Slovenia. However the real breakthrough was when they brought the house down at the Noorderslag festival in Groningen in 2001. The following day brought glowing reviews and calls from booking agencies and a TV show.
By that time, AKB was already the seven-piece band it is today. Alec Kopyt, the singer, lends the band a voice that is drenched in the bittersweet traditions of his hometown Odessa. The extended wind section caters for the Balkan and Klezmer tradition as well offering a generous helping of Funk, Jazz, Ska and Hiphop.
Since 1997 there have been more than a thousands performances and eleven albums. The band members are the spiritual kindred of the ‘klezmorim’: the professional Jewish musicians who trekked across Europe two centuries ago. The band has lost count of the amount of countries it has played in.
AKB was successful long before the Balkan hype became a worldwide phenomenon. They suddenly found themselves being sampled and mixed by dance producers, to their own astonishment. It appeared that the unique sound of the seven band members was perfect for the popular ‘Balkan Beat’. Even though this hype has died down, AKB continues to be busier than ever. The fifteenth anniversary of the band was celebrated with a big party in the pop temple Paradiso; it was AKB’s one-thousandth concert.