Matthieu Marthouret was originally a pianist, but when he had difficulty coming up with talented bassists to work with, he found that he was equally adept on organ. On Upbeats, his second CD as an organist, he displays a very original tone and style, sounding not at all like Jimmy Smith who is the usual dominant influence on organists. It would be simplistic to say that Marthouret plays the organ like a piano but he does have a dramatic and sophisticated style unlike most of his contemporaries.

On Upbeats, Marthouret is joined by drummer Manuel Franchi, either Maxime Fougeres or Sandro Zerafa on guitar, and either Nicolas Kummert or David Prez on tenor. Altoist David Fettmann sits in on “Upbeats,” adding additional fire to the music. However the results do not sound at all like a typical organ trio/quartet.

The musicianship is top notch throughout this adventurous music and the performances are full of surprises, ranging from funk to an opening bossa-nova, while never being predictable. Marthouret wrote all of the nine selections but does not dominate the soloing, giving plenty of space for the saxophonists and guitarists. However he sets the mood for each piece and his accompaniment pushes and inspires the other musicians. 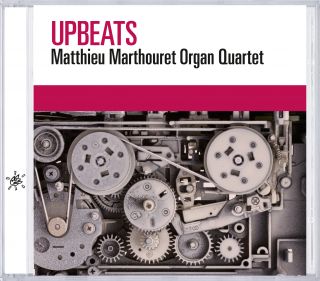