Review by Scott Yanow: Joe Candullo and his Everglades Orchestra - Blowin Off Steam 1926-1928

Joe Candullo never became all that famous but he led a fine band in the 1920s called his Everglades Orchestra. While Candullo lived until 1977 and performed in public until 1974, his most significant music was recorded in the ‘20s.

Blowin’ Off Steam, which has 24 of his best recordings (all but two dating from 1926), has many fine examples of hot dance music, much of which is also excellent mainstream jazz for the period. Among Candullo’s sidemen are such notables as cornetist Red Nichols, trombonist Miff Mole, Jimmy Dorsey on clarinet and alto, and the very talented mellophonist Ken “Goof” Moyer. The more notable selections include excellent versions of “The Hobo’s Prayer,” “Jackass Blues,” “Black Bottom,” “Messin’Around,” “Brown Sugar,” “St. Louis Blues,” änd “Stampede.”

The musicianship of Candullo’s Everglades Orchestra is top-notch, the solos are hot and concise, the ensembles are colorful and this little-remembered orchestra holds its own with many of the bands of the era.

Since Joe Candullo’s Everglades Orchestra recorded around 104 titles during 1926-29, hopefully a second volume will be compiled eventually. For now, Blowin’Off Steam, which as a bonus has definitive liner notes, is a CD that 1920s collectors will definitely want to pick up.

Thank you for your kind words. Joe was my great uncle, and just as kind personally as he was talented. 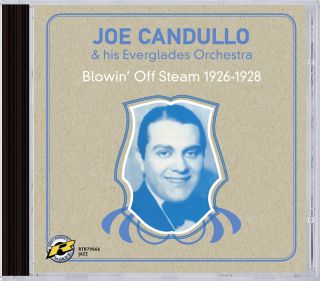 Joe Candullo and his Everglades Orchestra