The Original Memphis Five, a great band during 1922-26, are heard at their best on the two-CD set Pathe Instrumentals.

Phil Napoleon, who began to emerge on records in 1921, was possibly the first trumpeter based in New York to know how to swing, predating Louis Armstrong’s arrival by at least three years. His solid lead and ability to improvise melodically was a hallmark of the Original Memphis Five. Miff Mole was the first trombonist to liberate his instrument from its percussive role, playing strong solos in his own highly individual and eccentric style. Clarinetist Jimmy Lytell was one of the most fluent on his instrument during the time, pianist Frank Signorelli was an excellent arranger, and drummer Jack Roth gave the band additional color. Charles Panelli, who took Mole’s place during his absence (1924-mid 1925), sounded almost identical to Mole.

Performing jazz songs and pop tunes, the Original Memphis Five could hold its own with just about any other jazz group of the time. This double-CD, which contains 52 selections dating from Sept. 11, 1922-Nov. 26, 1926, has all of the instrumentals that the group recorded for the Pathe label, bypassing a few vocal numbers due to lack of space. The music is consistently enjoyable, melodic, swinging and fun.

Pathe Instrumentals is a must for collectors of 1920s jazz. The Original Memphis Five is well worth rediscovering. 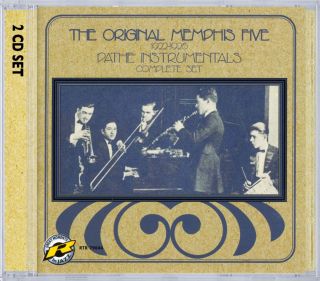