Thomas Ruckert began playing piano when he was 7 in his native Germany. He visited the United States for the first time in 1999, and was inspired to have an active performance career playing jazz. He first recorded as a leader in 2002. Ruckert has played with such notables as Lee Konitz, Donny McCaslin, Mark Murphy, Kevin Mahogany, and Randy Brecker in addition to leading his own long-term trio.

On Meera, Ruckert teams up with bassist Reza Askari and drummer Fabian Arends for four group originals, a classical melody, and a song apiece by Denny Zeitlin, Harold Arlen, Bill Evans and Frederick Loewe. Nearly all of the music is taken at slow tempos and, even when the pace is a little faster (particularly on “My Shining Hour”), the playing is very relaxed. Ruckert lets the melodies breathe and often speak for themselves.

Bill Evans is a strong influence on Ruckert’s style, and not only on Evans’ “Time Remembered” and Zeitlin’s “Time Remembers One Time Once.” Ruckert takes Bill Evans’ chord voicings as a starting point and then builds from there, infusing the music with his own personality. Askari is a subtle but creative bassist while Arends’ drumming is sometimes more felt than heard. They work together extremely well.

The resulting music is exquisite. 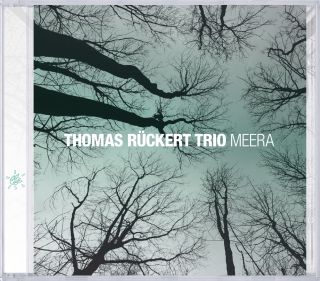