Review by Scott Yanow: The Houdini's in Time

The Houdini’s In Time is a definitive sampler of the premiere European hard bop sextet’s recording legacy.

The Houdini’s, which were formed in 1987 for a tour of Canada, developed very quickly to become one of Europe’s top hard bop groups. While the band sometimes hints at Art Blakey’s Jazz Messengers, Horace Silver and the Ray Charles group with Hank Crawford, it has an irresistible spirit and musical personality of its own.

In Time is a sampler that includes some of the highpoints of the Houdini’s recording career. The 14 selections are drawn from ten different albums, with most of the music dating from 1991-99 although there are also two selections apiece from 2007 and 2011.

The Houdini’s consist of trumpeter Angelo Verploegen, Rolf Delfos on alto and soprano, trombonist Ilja Reijngoud, pianist Erwin Hoorweg, bassist Marius Beets and drummer Bram Wijland. Each of the musicians has their featured spot on this set.

Among the highpoints are the bebop jam through rhythm changes on “Blue Ribbon Jury,” a version of “What Is This Thing Called Love” that is in 11/4 time (with Verploegen somehow taking a rewarding trumpet solo), the soulful “Headlines,” Delfos’ alto playing on “In A Sentimental Mood,” the enthusiastic “No More Yesterdays,” and a remake of Gil Evans’ “Gone.” Hoorweg’s daughter Kim Hoorweg, who at the time was 20 (making her five years younger than the band), does a fine job of singing “It’s All Right With Me” and “Shady Lady Bird.”

In Time is the perfect way to get introduced to the exciting music of the Houdini’s. 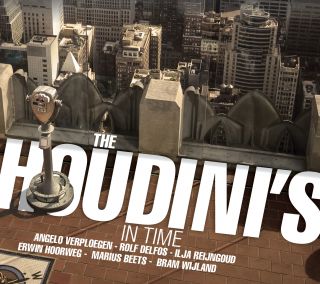