The Essential Chick Bullock 1932-1941 has many of the singer’s best performances with top swing players.

During 1930-41, Chick Bullock sang on a couple hundred records as a leader and quite a few as a guest with bands. Although he would never be considered a jazz singer, and in his early period he was not always an asset to records, he developed into a smooth and very capable vocalist. Most importantly, he was often placed at the head of groups featuring jazz all-stars.

This CD is the first to ever fully focus on some of Chick Bullock’s recordings as a leader. One can hear Bullock gradually mature into a pretty good singer. The first dozen performances, dating from 1932-36, have their moments. Trumpeter Manny Klein, trombonist Tommy Dorsey, and Jimmy Dorsey on alto and clarinet are on many of the selections. Violinist Joe Venuti helps out on “Somebody Loves Me,” the Mills Blue Rhythm Band backs Bullock on two numbers (including a fine version of “Frankie And Johnny”), and the masterful Bunny Berigan adds some hot trumpet to “I’m An Old Cowhand.”

Best of all are the eight selections that Bullock recorded at his final two sessions in 1940-41. He is joined by such greats as trumpeter Bill Coleman, trombonist Benny Morton, Edmond Hall or Jimmy Hamilton on clarinet, sometimes Bud Freeman on tenor, pianist Teddy Wilson and the pioneering electric guitarist Eddie Gibbs. Five alternate takes make the reissue of these two sessions quite complete, featuring Chick Bullock at his peak.

Although Chick Bullock would live for another 40 years, he never recorded again. Many of his top recordings are on this worthy CD. 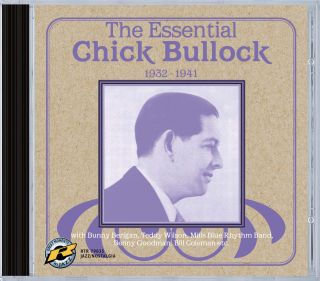