German tenor-saxophonist Birgitta Flick’s debut as a leader Yingying has her sounding relaxed and explorative with her quartet.

An excellent tenor-saxophonist based in Berlin, Birgitta Flick has an original sound on her horn, not sounding like any of her historical predecessors. She was born in 1985 and she began music with extensive piano lessons. When she was 13, she shifted her focus to the tenor. She attended the Academy of Music during 2002-05 and the Jazz Institute Berlin during 2005-10; one of her teachers was Kurt Rosenwinkel. She performed with several big bands and youth orchestras in the Berlin area while at school. Since that time the saxophonist has led her own quartet and worked with such groups as Flickstick, Freischwimmer XL, Lina Nyberg, the Peter Tenner Jazz Orchester and the German Women’s JazzOrchestra. She has also studied traditional Swedish music.

Yingying is Ms. Flick’s recording debut as a leader. She is assisted by pianist Andreas Schmidt, bassist Andreas Edelmann and drummer Max Andrzejewski on ten of her compositions.

Most impressive, in addition to Brigitta Flick’s original sound, is that she has a relaxed style. Even during the more heated and passionate moments, she sounds laidback, calm and under control. Her solos take their time and make every note count. Her fine trio follows her musical directions closely and builds on the mood that she sets.

Yingying is an impressive start for the 28-year old Brigitta Flick’s career. 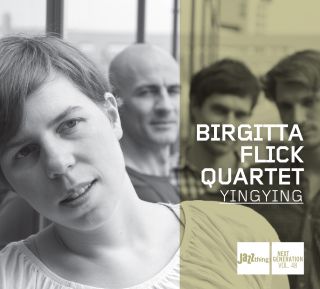