Friday the 25th of October, the Russian piano talent Olga Domnina will play at the Koninklijke Concertgebouw in Amsterdam. There she will play work of Prokofjev and present her debut album Seven Melodies for the Dial. This work was dedicated to her by Vladimir Genin, the composer, who will be present at this concert!

Next Sunday, the 13th of October she will talk about the pianocycle in Vrije Geluiden.

Olga Domnina
Olga Domnina started playing the piano at age seven. Since then, she devoted herself to music. Olga Domnina graduated with a ‘gold medal’ on the Gnessin Institute of Music in Moscow. The world premiere of Vladimir Genin's cycle Seven Melodies for the Dial took place in 2011, in the Moscow House of Music. Challenge Records released this cycle in September 2012 on CD: the daring recording debut of pianist Olga Domnina.

Musicweb-international wrote about Olga Domnina:
"Olga Domnina is the dedicatee of Seven Melodies for the Dial, and therefore it speaks for itself that her performance is stunning. She not only tackles the music’s technical demands with apparent ease, but also infuses every moment with emphatic and unpretentious expressiveness - no matter how sparse or dense the texture, how soft or tumultuous the mood" 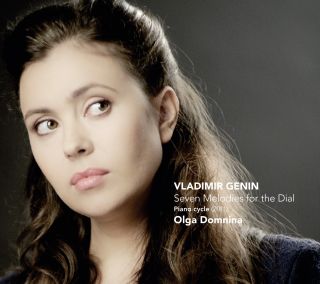 Vladimir Genin
€ 12.95
Add to cart
Product is on stock