Second album of Mendelssohns complete symphonies is out now!

Jan Willem de Vriend and The Netherlands Symphony Orchestra are back with the second volume of their survey of Mendelssohn’s Complete Symphonies. The first album contains Symphony no. 2 and has received some wonderful reviews. Now they come with their second album with Symphony nos. 1 & 3. This disc highlights the conductor's decision to use natural horns and trumpets with pistons.

Mendelssohns Symhonies
The Mendelssohns Symphonies both hark back to the old masters like Bach as look ahead to the future. The new and fresh sound of the harmonies are combined with an old-school musical approach. Mendelssohn sometimes uses fugues or chorales we know from older styles. He was the first to bring back those trustworthy techniques – and that, in itself, was also new.

You can find more information about this album here. The complete series will be released on SACD. 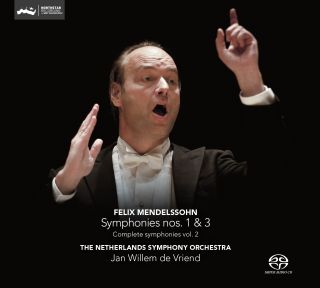