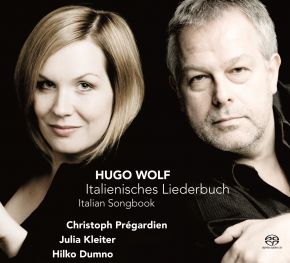 Wolf's lieder are often referred to as "symphonic lieder", with an  important part of the piano, beside the voice. Writer Paul Heyse  (1830-1914). translated from Italian, among other things, a large number  of mostly anonymous poems, which he published as the Italienisch  Liederbuch. Wolf has put these poems into delightful music, small  jewels.

Hugo Wolf, in 1896 - after a four-year period, marked by physical  and psychological problems, which later grew  more serious and  ultimately fatal - composed  among other things, the 24 lieder of the  Italienisches Liederbuch’s part two. This was his last important  composition, followed by only two lieder on texts by Lord Byron and  three on texts by Michelangelo.

Today, Wolf is considered one of  the most important 19th Century lieder composers, but that  recognition was slow in coming. As late as 1931, admirers felt compelled  to begin a Hugo Wolf Society to make his lieder better known via  gramophone recordings. Needing the least help, however, was the  Italienisches Liederbuch, various songs of which came to be loved early  on, largely owing to their melodiousness and the accessibility of their  content, but doubtless also for their brevity – if ever lieder could lay  claim to being “little jewels” it is the 46 of this bundle, which  together take up less than 80 minutes. (source: linernotes by Paul  Korenhof in the cd "Hugo Wolf - Italienisches Liederbuch")

I would be most appreciative if you would give the year of recording (rather than the date of release, which doesn't interest me much).