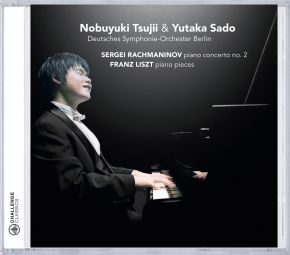 There is no piano concerto more beloved than the Second Piano Concerto by Rachmaninoff. When Nobuyuki Tsujii was in the Van Cliburn Competition this masterwork was one of the pieces he played and the audience loved it and love him! In 2009 James Conlon and the Fort Worth Symphony Orchestra played it together with Nobuyuki. In this magnificent recording the blind pianist joins conductorr Yutaka Sado and the Deutsches Symphonie Orchester Berlin. It is unbelievable that the pianist learned the formidable scores of the Second Piano Concerto by Rachmaninoff by ear and it is not a surprise that Nobuyuki Tsujii has become a worldwide sensation sice the after the Van Cliburn Competition and his winning of the Goid medal!

Rachmaninoff just had a rough and hard time before he composed the Second Piano Concerto:" ...after having spent three years of creative hardship, without composing anything, but composing the concerto not only finally got him out of his depression but also lifted his spirits and restored his confidence in his creative abilities. Even more, the first complete performance in October/November 1901 brought him great and lasting success. No wonder, as most in this romantic work comes down to the overwhelming powers of great and passionate melodies, searching harmonies and a clear demonstration of his flawless craftsmanship." (source: linernotes Aart van der Wal)

"The Liszt recital covers more than just one aspect of this composer’s multi-faceted musical genius, although it cannot be denied that hardly any composer evoked more controversy than Liszt, the ‘accusations’ ranging from the vulgar to the flamboyant. Liszt, the innovator and musical ‘exhibitionist’ as well as the poet obsessed by beauty, the man between earthiness and almost metaphysical spirituality. But he was even more than that, such as the dazzling arranger of works by other composers and the highly illuminating creator of the most magnificent and virtuosic of all opera paraphrases." (source: linernotes Aart van der Wal)

I am reviewing this disc for International Piano.Could you please tell me the format (ADD,DDD ETC?) Thank you
Richard Evans