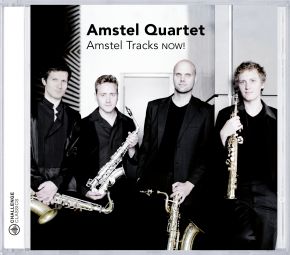 The idea is simple. After concerts, there is always someone from the audience who comes to talk to us and asks if we have recorded this or that piece. We have heard this repeatedly over the years, so we decided to combine all of the pieces that we and the audience like on one album. The other common link among these pieces is that all have been arranged or composed for or by us. There only one exception: the Rivier, a traditional saxophone quartet, but because we feel such a strong connection to this piece, we decided to make it as well. Before the release of the Amstel Tracks” we did not think it was such a strong concept, but we were wrong. The album turned out to be the most personal and successful Amstel Quartet CD. The concept of personal taste and emotional links to the works we play turned out to be much stronger than any concept on paper. Thus, we hope that Amstel Tracks Now! will live up to the expectations of all our fans. After we finished the recording, we realised that releasing this album would mark our fifteenth anniversary.

Agnes, that wondrous arrangement was done by Remco Jak. I heard the Amstel Quartet play it tonight in concert in Joplin, Missouri, USA. He introduced the piece. He said it was his first arrangement of orchestral music. I hope he continues to do many more in the years to come. He is truly gifted as is the entire quartet.

LS,Thank you for this beautiful music. Can you please tell me who arranged the Brahms 3rd movement oif the 3rd symphony for 4 saxophones ?
Thank you,
Agnes