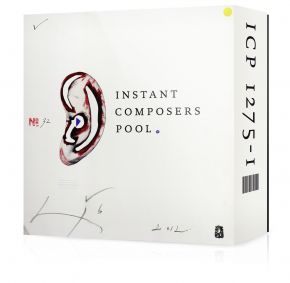 "Improvisation is like daily life... like crossing a street" - says Han Bennink. The ensemble of the Instant Composers Pool, or ICP, improvises for 45 years now on the highest level. "These guys can swing like madmen and then all of a sudden play the most sensitive ballads" according to trumpetplayer Dave Douglas.This is really an improvisational monster with ten heads! Furthermore co-founders Misha Mengelberg and Han Bennink are the true "Giants of European jazz"! ICP is historical, unique and there is nothing else like it in jazz.

The music that is released during all these years has now been collected and is planned to be released as a special edition box. It will contain 52 cd's, 2 dvd's (including bonus material that has never been released before), a blueprint of the famed ‘camel-chair’, and a photo-book of the rich ICP-history as shot by Pieter Boersma. Every box is numbered and unique because Han Bennink himself will be painting each copy by hand!

About the history of ICP:
In 1958, guitarist Jim Hall, in liner notes to a Jimmy Giuffre album, used the term “instant composition” to describe improvising. A few years later, Misha Mengelberg, knowing nothing of this, re-coined the term, and it stuck. A quiet manifesto, those two English words countered notions that improvising was either a lesser order of music-making than composing, or an art without a memory, existing only in the moment, unmindful of form. Misha's formulation posited improvisation as formal composition's equal (if not its superior, being faster).

Yes but: Misha says he was thinking of “instant coffee,” stuff any serious java drinker recognized as a sham substitute. He deflates his lofty idea even as he raises it. In the mid-1960s Mengelberg became involved with the Fluxus art movement, which he found inviting because it stood for nothing, had no ideals to defend. What bound together Fluxus's conceptualists, shock artists, early minimalists, musical comics et cetera was a need for a performance format that could accommodate them all. (Hence that symbol of '60s kookiness, the multimedia Happening.) Eventually he formed a band with that kind of flexibility: the modern ICP Orchestra.

ICP co-founders Mengelberg and drummer Han Bennink have played together since 1961; before long they’d played on Eric Dolphy’s 1964 Last Date and in a successful Dutch quartet, until they brought in the anarchistic young reed player Willem Breuker, whose disruptive presence tore the group apart. That was OK; Han and Misha liked musical confrontations. Mengelberg had studied composition at the Hague conservatory (alongside his friend Louis Andriessen); in his ’60s game piece “Hello Windyboys,” two wind quintets variously engage in call and response, communicate in musical code, interrupt or block each other, or seduce their rivals into cooperating. They did formally what ICP’s musicians now do informally.

Bennink, Breuker and Mengelberg founded the ICP co-op in 1967. In 1974 the saxophonist left to form the Willem Breuker Kollektief, longtime flagship of Dutch improvised music. Mengelberg (and Bennink) founded the raggedy ICP Tentet (including German saxophonist Peter Brötzmann, and sometimes cellist Tristan Honsinger). That band matured into something very like the present-day ICP Orchestra in the 1980s, with the addition of younger players, some of whom have been there ever since: trombonist Wolter Wierbos, saxophonists/clarinetists Michael Moore and Ab Baars, and bassist Ernst Glerum.

@emanuel maris: that's not correct - it's simply that one original album had twice the same content (a Dadaist joke by Mengelberg, most probaby), and the CD-edition simply reproduced that. If you listen closely, you hear the difference, not from the recording, but from the rips.

I am intrested in case in purchasing a copy of the ICP box. Can I know if the problem of the two CDs has been fixed? Best regards Alberto Pirelli

I understand that an accidental pressing mistake caused two of the CDs in the box to have the wrong contents, repeating the contents of two other discs in the box. Which were the 'mistake' discs? Have you sent out replacements to those you've already sent out boxes to? If I buy one of the remaining boxes, will the corrected discs be inside, or included with purchase to swap out?

Misha Mengelberg (artist)More information
08-07-2013 Jazzpodium
""1967 Mengelberg, Breuker ans Bennik founded the independent label IPC (Instant Composers Pool) […]. The entire IPC-catalogue has been published in an elaborate limited edition box on 52 CDs and 2 DVDs with unseen material. Beside the CDs the Box includes a book with photography of Pieter Boersma, who accompanies the ICP orchestra since 45 years, and a blueprint of "Camel-chair". Each box has been designed and hand-painted individually by Han Bennik.""
01-05-2013 Jazzwise
"Have no doubt; this incredible compendium is a historical artefact that will resonate for many years to come."
04-01-2013 New York City Jazz Record
"The ICP is a formidable ensemble that recordings can only hint at and their evolved mark on the world of modern jazz is indelible."
17-12-2012 Friesch Dagblad
"An unccomonly beautiful documentation of an important part of the (Dutch) jazz history."
01-12-2012 Jazzmozaiek
"A unique present"
Jazzism juni/juli 2013
"Complete Boxed Catalogue of the Instant Composers Pool is a historical release."
Downbeat
"It begins with a bang - newly issued small groups including all three founders, forecasting so much more to come: whimsey as a way to make and confound music."