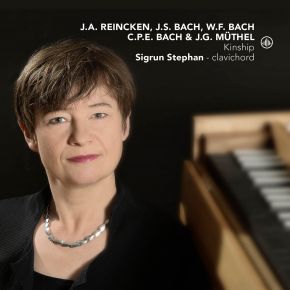 Who is akin to whom? Are they spiritual or elective kinships? In the first instance, all the pieces recorded here are akin to each other in that they are especially suitable for that most sensitive of all keyboard instruments, the clavichord. Beauty is another common feature, which they each display in their own way. And in the circle of fifths these pieces are very close to one another.

Personal and familial kinships become apparent with the name of BACH. It is also known that Johann Sebastian chose J.A. Reincken, around forty years his senior, as his teacher: Reincken can certainly be described as a musical father, a true kindred spirit, to J.S. Bach. Johann Gottfried Müthel slots into the ensemble as a logical consequence. He was J.S. Bach’s last pupil who had participated in transcribing The Art of Fugue and who composed in a consistently new and non-contrapuntal style. In this respect, he is musically much closer to Bach’s sons Carl Philipp Emanuel and Wilhelm Friedemann, almost a brother to them.

Carl Philipp Emanuel Bach (composer)More information
Johann Gottfried Müthel (composer)More information
01-03-2018 AMERICAN RECORD GUIDE
"This fine-sounding  recording fulfills the promise of its title and repertory choices and is an exemplary demonstration of performance on the clavichord."
11-01-2018 Music Web International
"Because of the variety in the programme and the two different instruments this disc is an excellent case for the clavichord."