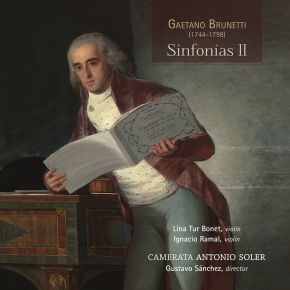 Gaetano Brunetti was, along with Luigi Boccherini, the main composer of symphonies during Spain’s Classical period- both because of the quantity of his work and its diversity. Other composers active in Spain in the second half of the eighteenth century were not at the level of the work of the two Italians, although we know a fair number that wrote symphonies, generally with a religious background. Brunetti wrote symphonies throughout his lifetime, the first one dating from 1769 and the last from 1794. However, a full 29 of them appeared in the 1780s. For reasons that can only be guessed at, the writing of his symphonies seems to be concentrated around the year 1783: no less than 23 works, 7 of which have a score dated with that particular year. The Camerata Antonio Soler presents on this new recording Brunetti’s Symphonies Nos. 3, 8, and 25. The ensemble was formed in 2011 and addresses a diverse list of works of all styles, with their emphasis being on the Spanish cl