Born on the Island of Bornholm, Bjarke Mogensen quickly made a name for himself as an internationally acclaimed accordion virtuoso and as a versatile musician with a keen ear for different styles. At a very early age he made his debut as a soloist with the Munich Symphony Orchestra in a German TV broadcast with millions of viewers. Since then an unusual curiosity and search for new sounds and expressions has taken him on musical paths where few other musicians have ventured before as a highly sought-after soloist in the classical music world.

Bjarke Mogensen received a long list of international awards such as The P2 Radio Chamber Music Competition and The Almere International Chamber Music Competition. He took 1st prize in the European Broadcast Unions “New Talent” competition in Bratislava and a few years later Mogensen received the Danish Music Critics Artist Prize – all firsts for the accordion.

Already during his student years, Bjarke Mogensen had his solo debut-recital at Weill Recital Hall at Carnegie Hall, New York and performed in European venues such as the Concertgebouw in Amsterdam and Barbican Hall, London.

He has performed chamber music in duo with among others violinist Gidon Kremer, violist Tatjana Masurenko and cellist Andreas Brantelid. As a soloist he has worked with orchestras such as the Moscow Virtuosi, Kremerata Baltica, Slovak State Philharmonic Orchestra, The Tiroler Symphony Orchestra, the Danish National Symphony Orchestra, Prague Radio Orchestra and The Copenhagen Philharmonic.

Bjarke Mogensen’s repertoire is almost unlimited, with a span ranging from folk music and accordion classics over his own arrangements and transcriptions to brand new works for accordion as well as improvisation.

A long succession of collaborations with prominent living composers has resulted in over 60 new compositions – concertos, chamber music and solo works – dedicated to Bjarke Mogensen.

A series of his award-winning recordings have been released by the British label Orchid Classics as well as the national Danish record label Dacapo-Records.

Bjarke Mogensen plays the Mythos Accordion No.5 often described as the Stradivarius of the accordion. He is also among the very few accordionists in the world who plays the quarter tonal accordion, an instrument which was custom made in Italy. Bjarke Mogensen graduated from the soloist class at the Royal Danish Academy of Music, where he now is an associate professor of accordion and chamber music.

Future engagements include the Finnish and Russian premiere of Danish composer Poul Ruders’ accordion concerto Sound and Simplicity. Yet another grand new work for the accordion written for and dedicated to Bjarke Mogensen. 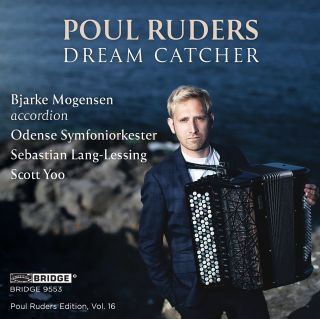