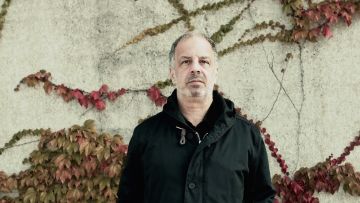 Albums
Banabila has recorded many albums, including VoizNoiz (2000) and Spherics (2001), originally released by Steamin' Soundworks  (NL). These albums were internationally licensed to Tone Casualties  (USA) and Pork Recordings  (UK). BBC legend John Peel was the first one who played music from VoizNoiz in his show. Moreover, Banabila's tracks appeared in a mix by Osymyso (4AM Eternal - MixMag Magazine) and vinyl followed (Pork 081). In 2008, Steamin' Soundworks released a special 2 CD album, Precious Images,  that featured 10 years of Banabila's recordings. For the same publisher, Banabila was the producer and co-writer of the album Arhil, by Ali Bahia El Idrissi. The first track of this album was used for the Putumayo sampler Sahara Lounge. Furthermore, his collaboration on VoizNoiz 3  (Challenge Records) with trumpet player Eric Vloeimans received the Edison Jazz Award in 2003.  In 2005 Banabila started his own independent label Tapu Records. Banabila was also awarded with a composition stipend for the period of 2012 - 2013 by FPK, the Dutch Performing Arts Fund. His track E.T. was used in Boarding Pass, a mix by French renowned dj / producer Rone for Tsugi Magazine #66 in 2013.  He recorded five albums with electronica wizard Rutger Zuydervelt (Banabila & Machinefabriek / Travelog / Error Log / Marcocosms /Entropia) and three albums with viola virtuoso Oene van Geel (Music for viola and electronics part I / part II / Live at Rewire - Whales Calling). Since 2014 he experiments with a small modular set for his series Feedback + Modular + Radiowaves.  In 2016 / 2017 three reissues with recordings from the 80's came out ; Chi - The Original Recordings (ambient) by Astral Industries (UK), Things Popping Up From The Past  (Early Works) by Bureau B / Tapete Records (DE), and a 2 LP vinyl Trespassing (one reissue; his first 1983 vinyl LP album 'Marilli', and one compilation - partly new works) by Séance Centre (CA). In 2018 Steamin' Soundworks reissued VoizNoiz part 1 as a 2LP vinyl album, including a new exclusive remix by Michel Banabila & Oene van Geel.  In 2019 Banabila self-released Uprooted, new work with contributions by Peter Hollo (cello), Gareth Davis (bass clarinet), Oene van Geel (viola & stroh violin), Gulli Gudmundsson (bass & ebow), Alex Haas (synth & electronics), and Stijn Hüwels (guitar & electronics).

Other projects
Besides making albums and musical scores, Banabila works with theatre, dance and visual art on more conceptual artistic projects. Banabila worked on various projects with video artists Geert Mul, Olga Mink,  and photographer Gerco de Ruijter. With Geert Mul he has an audiovisual set; Big Data Poetry, which they performed live in venues like The Barbican (London) during the Logan Symposium 2014, Yukunkun (Beirut) with vocalist Anas Maghrebi during the Global Week For Syria 2015, and TENT (Rotterdam) during Sound Spectrums 2012. With Olga Mink he performed at the LUX Festival (Sevilla), the VAD Festival (Girona)  and the State Of The Image Festival (Arnhem) in 2006. For Gerco de Ruijter he did sound design for several stop-frame animations, like the critically acclaimed Crops, shown in the Hirshhorn Museum (including a live performance -  Washington DC, 2013) and Ringdijk at Panorama Mesdag (The Hague / 2016). In 2017 Michel Banabila & Maarten Vos toured 4 months The Netherlands with HOME, a critically acclaimed dance performance with live music, by Conny Janssen Danst. In May 2018,  San Francisco Ballet used Banabila's Jump Cuts (remixed) in Guernica, a ballet by Annabelle Lopez Ochoa. In 2019 Banabila was commissioned by Pennsylvania Ballet to compose new work for Yin Yue and commissioned by Patrick O' Brien to compose work for Patrick O'Brien Collective, with help from Cuny Dance.