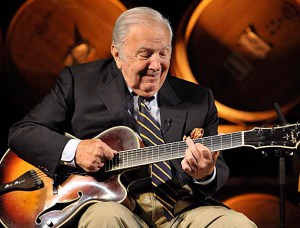 Bucky Pizzarelli has given the world of music many things, including two sons – John (guitar) and Martin (bass) – who feature prominently in today’s world of jazz. Born in 1926, Bucky is still going strong at eighty-eight years of age and is noted for his amazing skills as a rhythm guitar player, something he seems to have passed along to his son, John. Bucky has a strong affinity for guitar compositions of the 1930s, when jazz and dance music were brilliantly combined by the likes of Carl Kress and George Van Eps.

Bucky brought one other item of note to the world of modern guitar: the 7-string electric guitar, which he played almost exclusively. He first encountered the 7-string via George Van Eps, adopting not only that instrument but also George’s renowned chord progressions that were used as solos in place of single-note runs. The chord solo has since become a standard soloing style in guitar jazz and something John Pizarelli is known for.

For those nouveau rock guitarists who think that maybe Steve Via is responsible for the 7-string electric guitar, now you know better. We have George Van Epps and Bucky Pizzarelli to thank. Incidentally, 7-string acoustic guitars have been in use for over 150 years, having come to prominence in early-19th-century Russia and Western Europe. Van Eps had a custom 7-string electric built for him by Epiphone in the 1930s, while Bucky’s preferred instruments are built by Robert Benedetto. Finally, yes…Steve Vai is responsible for the first mass-produced electric, solid-body, 7-string guitar, the Ibanez UV-7. 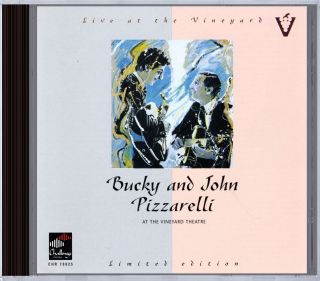 Live At The Vineyard