At age 16 Von played tenor in Horace Henderson's big band for a year. He was drafted into the Navy during WWII and after his return to Chicago he played with his brothers George on guitar and Bruz (Eldrige) on drums at the Pershing Hotel Ballroom. Various leading jazzmen such as Charlie Parker, Roy Eldridge and Dizzy Gillespie played there with the Freeman's as the backing band. In the early 50s Von played in Sun Ra's band. Von's first venture into the recording studio was for Andrew Hill's second single on the Ping label. He did some recording for Vee Jay with Jimmy Witherspoon and Al Smith in the late fifties and appeared and was recorded at a Charlie Parker tribute concert in 1970. It was not until 1972 that Von first recorded under his own name with the support of Roland Kirk. His next effort was a marathon session in 1975 released over 2 albums by Nessa. Since then his recordings have included 3 albums with his son, the tenorist Chico Freeman. Von is considered a founder of the Chicago school of jazz tenorists along with Gene Ammons, Johnny Griffin and Clifford Jordan.

Von's recorded output is not prolific for his years on the scene, in fact it has probably taken off most in the last ten years or so. His vinyl LPs can be hard to track down especially those that have not yet received CD release, but he still lives in Chicago and can be caught playing live there on a regular basis. 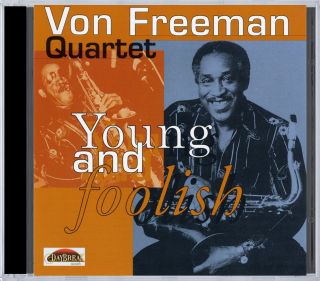