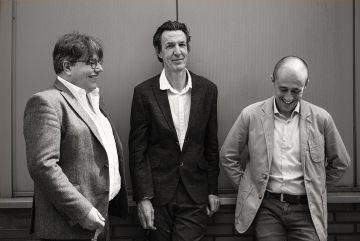 Juraj Stanik (Amersfoort, The Netherlands 1969) started playing the cello at the age of eight, continuing his education at the combined Music/Secondary School Department of the Royal Conservatoire The Hague, at the age of twelve.
During his cello studies he became interested in jazz music by listening to the jazzpianist Frans Elsen, who later was to become his teacher and who, at that time, performed with a lot of American soloists such as Bob Berg, Woody Shaw, Benny Bailey to name just a few.
When starting to focus entirely on practicing jazz piano he was accepted at the Jazz Department of the Royal Conservatoire.
Within a couple of years he performed with the ‘Jarmo Hoogendijk/Ben van den Dungen quintet’ and with the band ‘Five Up High’ at international jazzclubs and the North Sea Festival.
Jazz became his passport to the world.
With Bird Award winner Toon Roos he toured in Spain, with the ‘Hoogendijk/van den Dungen quintet’ in Germany and France.
In 1991 he graduated cum laude at the Royal Conservatoire, The Hague, the Netherlands.

After his studies he regularly visited New York and played with Essiet Okon Essiet, Tim Armacost, Chris Potter, John Swana and others.
He performed at places like Augies, Smalls, Dizzy’s and the Iridium.
For several years Juraj was leader of the houseband at Murphy’s Law in The Hague, which became an internationally known jazz venue.
Musicians like Jesse van Ruller, Chris Potter and Seamus Blake performed there.
He also had regular gigs at ‘Soho’ where he introduced many local and international musicians.

Juraj Stanik has developed a personal sound and style that has become recognizable and esteemed.
He has a lyrical, but also a virtuoso side and is constantly exploring new ways of improvising.
He has released five recordings as a leader, which spotlights his work as a composer and bandleader
In the year 1989 he won the prestigious Pall Mall Swing Award and with the band ‘Five Up High’ The Leverkusen Jazz Award.
Juraj has been appointed Main Subject teacher at the Royal Conservatoire in The Hague, the Netherlands. As a teacher and performer he is an influential character in the Dutch and International Jazz scene. Many of his students have become very successful in the music business. At present he travels a lot: Pakistan, Greece, Norway, Kenia, Dubai, Indonesia.
He is often invited as a guest teacher at various music institutes.
A very well received solo piano album, called ‘I wonder’ has recently been released.
The collaboration with bassplayer Frans Jan van der Hoeven has existed for a very long time. Together with him Juraj recorded music and accompanied many fine artists.
When they met the drummer Roberto Pistolesi the musical click was immediately there. It was clear: A new piano-trio with high potential was born! 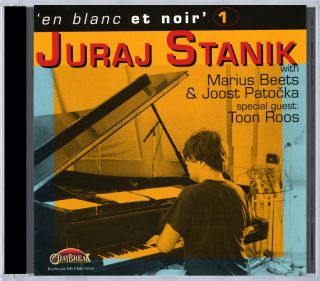 The triumvirate managed to sort out everything superfluous and to find the arrangement and distribution of roles between the instruments in such a way that they seem appropriate to the musical material.

"
23-06-2020 Rootstime
"Stanik has a velvet touch and knows how to create an intimate atmosphere. You can hear that especially in his fabulous version of "Soul Eyes" ... A surprisingly good CD, I will not easily forget the name Juraj Stanik."
19-06-2020 Jazzenzo
"Perfect production, which is a successful tribute to a great musician, who brought international jazz to international level."
12-06-2020 Jazzism
"An excellent pianist, Juraj Stanik. And someone who can make a stunning impression especially harmoniously."
03-06-2020 Jazzenzo
"A very nice traditional album"