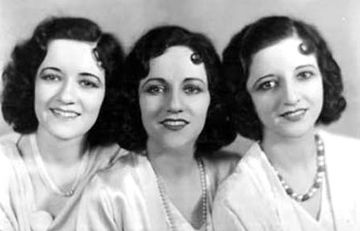 They were three extraordinarily gifted musicians who emerged from the wellspring of the jazz movement in New Orleans in the early 1900s. They were icons, pioneers in music and early radio with influences that extend far beyond their own time. As Maxene Andrews once said, “They took the idea of jazz and did it vocally.” And they did it with such blending and precision that it has never been equaled since. Hard to believe? Perhaps if they were not pretty little white females, one of whom was unable to walk, it might be easier, and if not, they may have been included somewhere in the voluminous material on the history of American music. Instead, they have been excluded by all except those few scholars who know the truth about the Boswell Sisters, and are able to see past their own prejudices as well as an act name that makes them sound like just another cute "girl group." These few discovered that many of the giants of the swing era worked in orchestras for the Boswell Sisters, and even stood and applauded in honor of their musicianship at the end of a recording session with them. They know that Glenn Miller wrote down some of their arrangements for the orchestras because the sisters never wrote anything down, storing all their arrangements in their brains, and that he is credited on some songs with the arrangements the sisters themselves created. They know that Martha Boswell played the piano on the majority of their recordings, radio shows & live performances, alongside Tommy & Jimmy Dorsey, Glenn Miller, Artie Shaw, Bing Crosby, Benny Goodman, Mannie Klein, Bunny Berigan, Joe Venuti, the Mills Brothers, Paul Whiteman, Russ Columbo, Eddie Lang, Joe Tarto, Victor Young, Jackie Taylor, Harry Hoffman, Jack Purvis, Red Nichols, Chauncey Morehouse, Dick McDonough, Carl Kress, Russ Case, Theo Uden Masman, Johnny "Scat" Davis, Stan King, Don Redman, Manny Weinstock, Art Grier, and Bob Effros to name a few, but yet her name goes unheralded in history as a jazz and swing great, unlike many of these men. They were musician's musicians, with a long list of those who admired them, such as Louis Armstrong and Duke Ellington, and who were influenced by their style, including Bing Crosby, Ella Fitzgerald, Wynonna Judd, Manhattan Transfer, Steely Dan, and a long list of "girl groups," including most notably the Andrews Sisters. They were the Beatles of the golden age of jazz, and in fact, they, along with Armstrong and Ellington, led a musical "invasion" of England three decades before the mop-tops invaded America. Believe it or not, today they continue to be widely imitated around the world by musicians and vocalists of all genders, races & cultures. 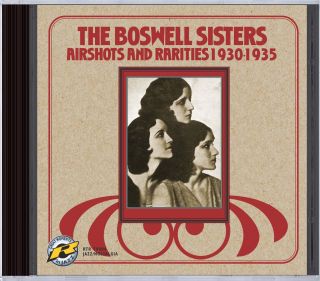 The Boswell Sisters
Product is no longer available