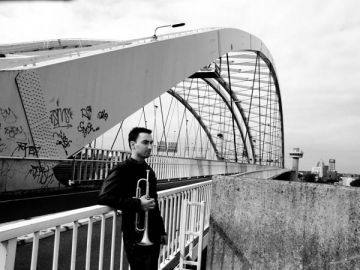 Music’s been Rik Mol’s thing the whole way since starting playing trumpet when he was 8. If Zeeland, the Netherlands native Rik Mol had his way, he would be a Restaurant-chef today. But luckily fate brought him to the trumpet. “I remember that I was really curious to know what was in a blue suitcase that was standing in my dads office.” “Finally he let me look inside, and a silver shining instrument was in it; the trumpet.” “I tried it and immediately I was able to play a note. It surprised us both I remember” From that day playing the trumpet became far more interesting than his dream of having his own restaurant. Already after one year of practicing he was admitted to the special preparatory-department for young talented children at the Conservatory of The Hague. Rik was classically trained there by studying with teachers such as Huug Steketee and took private lessons with Theo Mertens and Maurice André.
In his early teens being still in high school classical music upbringing almost took a back seat as he became more enamored with jazz/pop and was inspired by private-lessons with Wynton Marsalis.
But he developed quickly, playing both jazz, pop and classical music locally. He spent most of his high-school days playing up to five nights a week at jazz clubs and occasional concerts, giving him an early start to his professional career.
Nowadays Rik developed himself into one of the most promising European trumpeters of this time: Only 22 years old, Rik Mol has the world at his feet.
At his young age he has been able to win a lot of first prizes that can be won at his field, among others:
European Trumpet Contest / Yamaha Soloist Award / Prinses Christina Concours / Finalist Deloitte Jazz Award
Besides playing with all main figures in the scene like, Candy Dulfer, New Cool Collective, Trijntje Oosterhuis, DJ Maestro, Metropole Orchestra, Bløf, DJ Bryan S, Jazz Orchestra of the
Concertgebouw, Cubop City BigBand etc. And travelling backwards and forwards to Berlin, New York and London for sessions with Gerard Presencer and Till Brönner, or touring with “Europe’s Finest in latin jazz” Nueva Manteca, he has been able to surround himself in his group with Holland’s leading jazz and pop musicians. 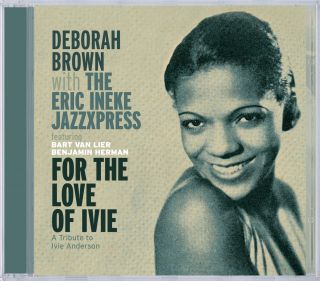 The Eric Ineke JazzXpress/Deborah Brown
€ 14.95
Add to cart
Product is on stock
17-10-2016 Jazzflits
"Swinging and bursting and thereby forgetting about the daily rush."

Rik Mol - Writing in the studio for new album