As one of Holland's leading string quartets, the Franciscus Quartet enjoys international acclaim for its captivating, intense playing and its interesting choice of programs. The four musicians are all active members in the Dutch radio orchestras. The quartet has a busy concert agenda and is regularly aired on the radio. They have performed in prestigious halls such as the Kleine Zaal of the Concertgebouw in Amsterdam (season 2001-2002, a Spanish evening with Boccherini, Arriaga, Turina and a Sunday Morning Concert with Bach, Haydn, Mendelssohn), Muziekcentrum Vredenburg, De Doelen and the Muziekcentrum of Eindhoven. In 1999 the quartet performed a concert with Jessye Norman in the Grote Zaal of the Concertgebouw in Amsterdam with works of Chausson and Ellington. On invitation from the Bayerische Rundfunk, the Franciscus Quartet performed in Munich and they appeared for Südwestfunk Baden-Baden in the Schwetzinger Festspiele in 2002. The quartet also toured to England and Lithuania, performing at festivals in Kaunas and Vilnius and to Curacao with appearances at the Tertulia Musikal Festival. While there they performed a series of 12 educational school concerts, exposing 2000 children to classical chamber music for the first time. The Franciscus Quartet has released eight CD's, the first of these in cooperation with the Dutch Radio AVRO. 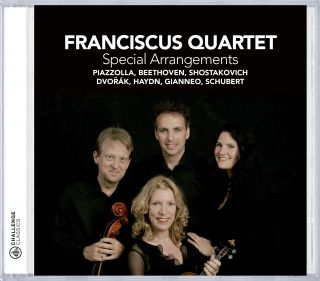