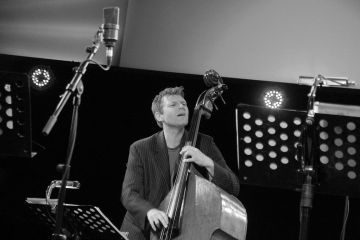 Bassist and composer Martin Wind (Germany, 1968) earned himself a diploma as Orchestra Musician at the Music Conservatory in Cologne and studied at New York University (NYU) with a scholarship by the German Academic Exchange Service. Since his move to New York Martin has become a regular at all major jazz clubs and is also in demand as a session player.
In 1995 Martin came in third at the International Thelonious Monk Bass Competition in Washington, D.C. In 1996 Martin Wind won the first Cognac Hennessy/Blue Note Jazz Search in Germany with his trio “Dreikland” and got to record an album for Blue Note Records.
Martin has released about 10 albums so far as leader/co-leader including his debut album “Gone with the Wind” (1993), “Tender Waves” (1996), “Dreiklang”(1997), “Family” (1999), and “The Soccerball” (2002).
Currently Martin is member of the trios of Bill Mays, Dena DeRose, Don Friedman, James Gordon Williams and Russ Kassoff. He also appears frequently with Matt Wilson’s Quartet and “Arts and Crafts”, and Bill Goodwin’s Orntette.
With Bill Mays, Martin has been playing for more than a dozen years and they’ve released many albums together, notably Bill’s three recordings for the Palmetto Label.
Martin Wind has recorded and/or performed with the following artists: Guidon Kremer, Christoph Eschenbach, Mstislav Rostopowitch, Lalo Schifrin, Monty Alexander, Pat Metheny, Clark Terry, Mark Murphy, Slide Hampton, Toots Thielemans, Jim McNeely, Buddy DeFranco, The Metropole Orchestra, Radio Big Bands Cologne, Hamburg, Frankfurt and Berlin, Michael Brecker, Randy Brecker, Eddie Daniels, Curtis Fuller, Phil Woods, Bud Shank, Johnny Griffin, Bucky Pizzarelli, Mike Stern, Terell Stafford, Larry Goldings, Village Vanguard Orchestra and others.
Scott Robinson (New Jersey, 1959) is one of today’s most wide-ranging Instrumentalists. Scott has been heard on tenor sax with Buck Clayton’s Band, on trumpet with Lionel Hampton’s quintet, on alto clarinet with Paquito D’Rivera’s clarinet quartet, and on bass sax with the New York City Opera •Scott has been playing baritone sax with Maria Schneider’s Jazz Orchestra for more than a decade.
Gregory Hutchinson (Brooklyn, New York, 1970) is currently working in groups led by Diana Reeves and Joshua Redman and has worked with Red Rodney, Betty Carter, Joe Henderson (Album “Lush Life”), Freddie Hubbard, Roy Hargrove, Ray Brown and many others. 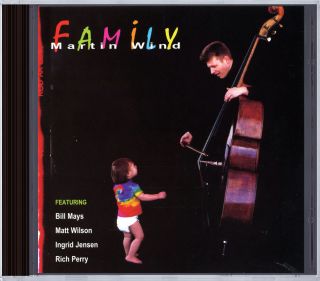