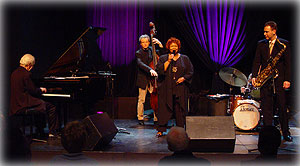 Deborah Brown was born in Kansas City and became a professional singer when she was twenty. In 1985 she moved to Europe, where she soon made her first record under her own name with trombonist Slide Hampton. Since then she has sung with many notable musicians, including Johnny Griffin, Toots Thielemans, Benny Bailey, Red Mitchell and Ed Thigpen. She now lives in the United States.
Since the mid-sixties Eric Ineke has been very active on the Dutch jazz scene, not only working with small groups but also occupying the drum chair in big bands like the Dutch Jazz Orchestra. He has been heard with many visiting Americans, among them Dizzy Gillespie, Al Cohn, Hank Mobley, Clifford Jordan and Jimmy Raney. A few years ago he started JazzXpress, his first band as a leader. 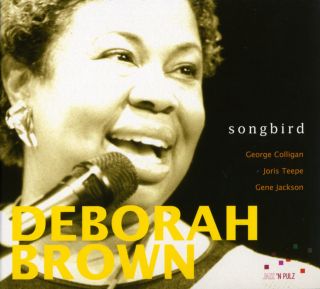 Let me know when available - € 12.95
08-09-2017 Dr Jazz
"Browns vocal qualities are indisputable: her phrasing, the necessary breathing technique and her range leave nothing to be desired. The purity is dazzling (Boplicity!) And her enthusiasm has no limits."