Pier Paolo Pozzi (b. 1964) is an Italian drummer and composer. Between 1983 and 1986, he underwent his musical studies at Rome’s most prestigious jazz conservatorium, Popular School of Music of Testaccio (S.P.M.T). In 1986 and 1987, he studied with Jimmy Cobb and Tommy Campbell, Eddie Uribe and Gary Burton at the summer clinics conducted by the Berklee School of Music where he played with the Berklee’s Big Band conducted by Ted Pease at the Umbria Jazz 87’ festival. Since then, he has performed at the Berlin festival (Germany) celebrating the city’s 750 years of foundation and performed at various Italian state’s radio and television stations. Over the past ten years, he has performed with countless other Italian jazz artists including Antonello Salis, Crystal White, Joy Garrison, Fabio Zeppetella, Ares Tavolazzi, Massimo Urbani, Tony Scott…and many others. In 1993, he left Italy to live in Paris where he fronted several bands including the P.P.Pozzi Trio and Quartet Gimmy Gourley Trio and Michel Graillier Trio. In May 1998, replacing Lewis Nash, he performed with the Tommy Flanagan Trio for a week at the All Jazz Club in Paris with Peter Washington (bass). It is the complicity between the musicians near him all these years that has permitted Pier to conclude this CD project. 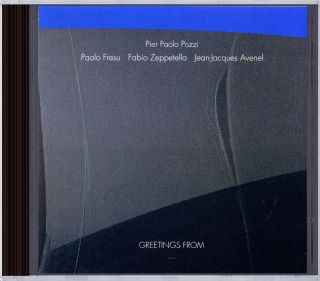