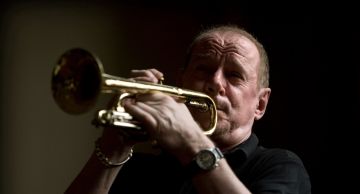 Digby became a fulltime jazzman in l977 after twelve years as a qualified librarian in Southend-on-Sea working night by exhausting night in everything from local soul and dance bands to avant-garde jazz ensembles in Southend and all over his home-county of Essex. From l973 he began working his way up the professional ladder as a junior partner in established jazz bands led by Hugh Rainey, David ‘Eggy’ Ley, Eric Silk, Keith Nichols, Ron Russell and Lennie Hastings. He was also privileged to work with trumpeter Alex Welsh’s band (frequently as Welsh’s deputy) and recorded his first album with Welsh's band in l974. “Alex was a dear man” says Digby “ – and very much an adviser as well as a musical promoter for me. I’ll never forget him“.

From l977, after giving up his day-job (“there just wasn’t time for it!” he says), he worked amongst others with Lennie Hasting’s band (recording his first live ‘BBC Jazz Club’ in l976), Dave Shepherd’s All Stars, Keith Nichols’ Midnite Follies Orchestra, the co-operative quartet 'Velvet' (formerly Stephane Grappelli's Trio) with guitarists Denny Wright and Ike Isacs, and the Pizza Express All Stars. Later, from l983 he concentrated on a variety of solo projects (including collaborations with veterans Nat Gonella, Britain's first star trumpeter, and double-bassist Tiny Winters) and from l987 led his own band the 'Jazz Superkings'. He also founded the charity 'Jazz College' with pianist Stan Barker in l979; the National Jazz Archive in l987 (currently celebrating its twenty-sixth year as Britain’s primary research centre for jazz music in 2014) and a number of other jazz-related organizations at this period, including the Association of British Jazz Musicians (l987) and Jazz Section of the Musicians' Union (l992-2014).

During the l990s (after a temporary playing setback) he combined playing with intensified broadcasting (for Jazz FM, BBC World Service, and BBC Radios 2 and 3 for their five-night-a-week series 'Jazz Parade'). However in l998 he returned at full strength to fulltime trumpeting, going back to the BBC only for 'Specials' (including a live feature on 'Jobim's Bossa Nova', l999, and a new series with George Melly 'It's Trad Dad', 2005). ”The trumpet is the reason I came into jazz” says Digby “ – and that’s the way I want it to stay”.

In late l999 Fairweather replaced the late and legendary British trumpeter Kenny Baker in his 'Best of British Jazz' package (alongside trombonist Don Lusher from 2000-2006) and continued to co-lead the 'Great British Jazz Band' (founded with his close friend the late trombonist Pete Strange in l994). The ‘Great British Jazz Band’, an all-star assembly recorded three albums for the celebrated ‘Candid’ label of Alan Bates and only ceased performing regularly after Strange’s death in 2005.Meantime in l995 Digby had formed a new band, his ‘Half Dozen’; a musical move which has been his central artistic project ever since. The Half Dozen recorded their first album ‘Things ain’t what they used to be’ in l998, played regular South Bank concerts, and began national touring alongside blues legend George Melly in January 2003. Since then his group has won the ‘British Jazz Award’ for ‘Top Small Group’ for eight of the nine years 2005-13 (Some sort of a record surely?’ says Digby!). During his five years with Melly, Fairweather (who has appeared on over eighty albums as leader and sideman since l977) recorded three more with his new musical partner. The first of them, ‘Singing and Swinging the Blues’ (Robinwood 2003), was voted ‘Observer Record of the Week’ by the respected critic, author (and musician) Dave Gelly. At the time his Half Dozen’s second solo collection 'Things ain't what they used to be' was also one of the top five choices for 'CD of the year' for Jazz Journal International’s editor Eddie Cook.

In 2002/3 Fairweather joined a rosta of American Stars at the Blackpool Jazz Party to widespread acclaim, and in December 2005 after signing to Candid Records his second album with Melly - 'The Ultimate Melly' (featuring Jacqui Dankworth, The Swingle Singers, John Chilton, superstar Van Morrison and – of course - his Half Dozen) was issued in time for his third Christmas sellout season at Ronnie Scott's to rave reviews. Digby's newest book 'On the road with George Melly; the last bows of a legend' (Robson Books) was published in August 2007 and George's last album with the Half-Dozen - 'Farewell Blues' was issued on Lake Records in September 2007,the year of his death.

Digby’s first autobiography 'Notes from a jazz life' was published by Northway Books in Autumn 2002 and a DVD by Zoltan films 'Scenes from a Jazz Life' (2005) helped to tell his story up to then in words, live footage and - of course - music! Other books he has authored (or co-authored) include 'How to play the Trumpet', 'Jazz; the Essential Companion', 'Jazz; the Rough Guide', 'Grove's Dictionary of Jazz', the 'Oxford Companion to Jazz’ and a biography of Nat Gonella titled 'A life in jazz', co-written with Ron Brown. His latest autobiography ‘A Jazz Life; the Full Score’ is awaiting publication in 2015.

After George Melly's final performance in 2007 Digby began a new musical teaming with pop legend Paul Jones for the jazz-and-blues show called ‘Rocking in Rhythm’; a collaboration that continues to flourish today. After founding his own label ‘Rose Cottage Records’ in 2006 he has also continued to record prolifically; his latest issues include ‘To Frederick with Affection’ (a celebration of the music of Frederick Delius, commissioned by the Delius Society/RCR 004/2013 which has its London premier in September 2015) and ‘Chris Ellis; vocal with hot accomp’ (RCR005/2014); the first in the series ‘Digby Fairweather Archives’. Today, after almost forty years in professional jazz, he continues to lead his beloved Half Dozen and ‘Premier Quartet’, sells out Ronnie Scott’s with every appearance, and also plays solo concerts for clubs and jazz festivals countrywide.

A prolific award-winner, his honours include 'BBC Jazz Society's Musician of the Year' (l979), BT Jazz Awards (Trumpet l992/Services to jazz l993), Benno Haussman Award for Services to Jazz (l993), and Freedoms of both London (l992) and his hometown Southend-on-Sea (in their 'Millennium Roll of Honour' 2000).In 2013 London’s ‘Worshipful Company of Musicians’ presented him with their ‘Lifetime Achievement Award’ for ‘Services to Jazz’; ‘a tremendous privilege’ says Digby. He is currently President of 'Ongar Jazz Club' in his home county of Essex and has been Patron of the Birmingham International Jazz Festival since 2008. In 2009 as Founder of the National Jazz Archive he was presented with their 'Special Award' in celebration of the organization's twenty-first anniversary. In 2015 Digby received the Britsh Jazz Award (the 'Jazz Oscars') for 'Services to Jazz'.

After almost forty years in professional jazz Digby Fairweather remains – in the words of ‘The Stage’ – ‘just about the best ambassador the music could have’. The story goes on…… 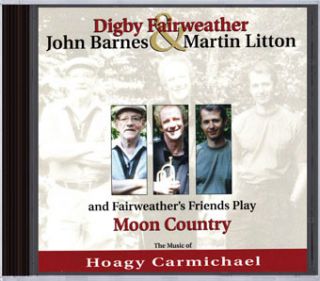