Fezile ‘Feya’ Faku a trumpeter, was born in New Brighton, a South African township in Port Elizabeth, which has made a title for itself as South Africa'’ university of Jazz, after producing some of the country’s jazz greats. He started playing without any formal training and received theory and practical lessons from various artists around Port Elizabeth. He later completed a Performers Diploma in Jazz Studies at the University of Natal, South Africa.

He has been associated with some of South Africa’s classic jazz musicians including Barney Rachabang, Thandie Klaasen and the late Duke Makasi. “I was the youngest member of the Winston ‘Manunku’ Ngozi Quintet,” says Feya. “I learnt a lot from working with these talented and experienced musicians.” He still continues to work very closely with Winston ‘Mankunku’ Ngozi.
Feya also works with Abdullah Ibrahim, and is featured in Abdullah’s latest CD; “Made in South Africa” which was launched into the South African market in May 1998. He has recently completed the recording of a CD for the Mahube project – an interesting combination of African music – which toured parts of Europe in 1997 and formed part of South Africa’s renowed arts festivals in 1998, ‘The Grahamstown Arts Festival’.

Feya’s involvement in Mahube and other projects such as NU Connection, Jazz Counterculture and his current leadership of the Durban based quintet, The Core, is a demonstration of his dedication to Jazz as an evolving art form, based on the understanding and appreciation of its classic form. 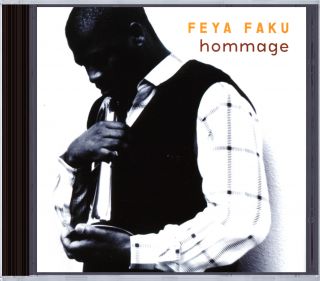