Ensemble Syntagma, founded by the composer Alexandre Danilevski, presents its fourth CD. Its three previous recordings - Musique Baroque Russe and Touz esforciez (Pierre Vérany, 2002 and 2004); and Gautier d’Epinal. Remembrance, 2008, CC72190 - are devoted to little-known or unknown repertoires. These recordings have – for their artistic choices at least – met with the approval of the public, the press and a growing number of performers.
Syntagma gave its first concert in 1995 as part of the Luxemburg European Capital of Culture, with a programme combining arias by G. Frescobaldi and Spanish songs of the sixteenth and seventeenth centuries. The critics acclaimed it as “an absolute revelation” and as a “splendid championing of early music”.
The ensemble’s repertoire extends from the thirteenth to the twenty-first centuries. This diversity is best explained by the ensemble’s director and founder: "I do not have any specific priorities, as long as the music makes sense".  Personally, in monodies I like what is sophisticated, with rhythmic problems, or rich in melodies, complex, in short, displaying genius… I like every kind of music, as long as it is of the highest quality. I try to gather round me pieces that are still unpublished or rarely performed… There are some contented souls who can play the same music their whole life long… But I need change. I don’t know if this is good or bad, it’s just the way it is. … I think that unfortunately medieval music is in need of a certain rehabilitation: often its profundity is hidden behind its exoticism. I place the emphasis on the former aspects: profundity and seriousness.”
Syntagma searches for the harmony of individual artistic expressions that belongs to the musical spirit of the Middle Ages and remains an aspiration of our times. 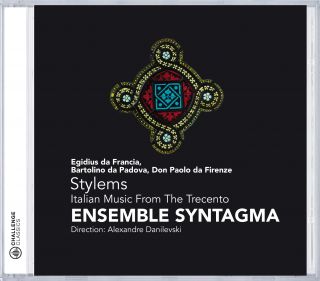 Stylems - Italian Music From The Trecento