The encounter of the greatest German jazz musician, the trombonist Albert Mangelsdorff and the unsurpassed drummer, percussionist and musical globetrotter Reto Weber with his Percussion Orchestra, which included the African percussionist Nana Twum Nketia (who died in 1994) and the Iranian zarb player Keyvan Chemirani, was a great stroke of luck. This constellation has existed since the beginning of the 90s, with occasional reinforcement from another wind instrument player, usually the saxophonist Chico Freeman. The band has performed throughout the world and at all important music festivals. One high point was their concert at the Montreux Jazz Festivals in 1994, which you can listen to on the CD "Live At Montreux." It is a brilliant masterpiece with a multicultural basis, free improvisation, and creative and virtuoso performances.
The musical jack-of-all-trades and globetrotter Reto Weber founded the Percussion Orchestra about 20 years ago with the Ghanaian Nana Twum Nketia (who died shortly after this recording) and Djamchid Chemirani, the father of the highly talented Keyvan Chemirani from Iran who can be heard on the "Live At Montreux" CD. In 80s, the orchestra gave innumerable concerts, sometimes with important percussionists from other cultures and traditions such as Dom Um Romao from Brazil, Zakir Hussain from India and Adama DramÈ from Burkina Faso. The idea to combine percussion and wind instruments was already formed in the middle of the 70s, when Reto Weber and Albert Mangelsdorff had their first duo performances. 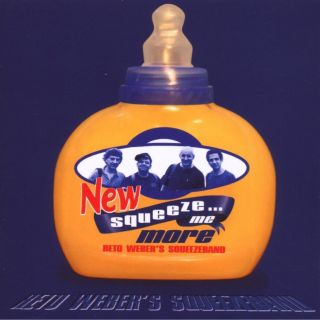