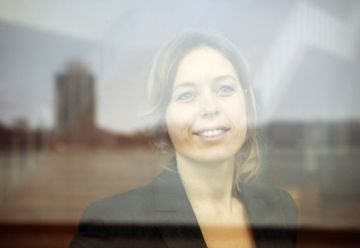 Tineke Postma is an internationally acknowledged jazzsaxophonist.  During her college years at the Conservatory of Amsterdam, she received two scolarships to study at the Manhattan School for Music in New York, where she was taught by Dick Oatts, David Liebman and Chris Potter. In 2003, Tineke gratuaded with Honors at the Conservatory of Amsterdam, where she has been teaching since 2005. Tineke plays energetic, modern jazz and is inspired by Wayne Shorter, Cannonball Adderly, John Coltrane, Miles Davis and other great legends, without ignoring her own creativity.  The British Newspaper “The Evening Standard” called Tineke in 2009 “One of the leading ladies in Jazz”!

AWARDS
Tineke has received several awards for her remarkable compositions and artistry, among which the Jazz  Juan Revelations Award  in 2009 (Antibes Juan-les-Pins Jazz Festival).  In 2006, Tineke won the prestigious Midem “International Jazz Revelation of the Year Award”  in France, which she received during an award ceremony “Les Victoires de Jazz” that had been broadcasted live and nationwide on the French tv, channel France 3. In 2003 Tineke received  the “Jazz All Star Award”  (USA) Tineke also received several Dutch awards: “Langs de Lijn Award” (2007), “Singer Laren Jazz Award” (2002),”Heijmans Award” (2004). In 2008, Tineke had been nominated for another prestigious Dutch Prize: the “Notenkraker Award”.  For two years in a row, 2009 and 2010, Tineke was nominated for the “Paul Acket Award” (North Sea Jazz).  Tineke's latest cd " The Traveller" has been nominated for the important Edison Jazz award for 2010.

TINEKE POSTMA INTERNATIONAL QUARTET
The Tineke Postma International Quartet with Geri Allen on piano, Scott Colley on bass and Terri Lyne Carrington on drums, was founded in February 2009, when Tineke recorded her new cd “The Traveller”. Tineke performed with the above mentioned musicians at the Barbican Hall in London, The North Sea Jazz Festival and at Jazz  Ramatuelle in France. In February 2010 they performed at the Blue Note in New York (USA).For the full concertlist of Tineke Postma, please visit “Tours and Projects” at www.tinekepostma.com

PROJECTS
In  2003, Tineke performed with the Sisters in Jazz Project in the Mary Lou Williams Jazz Festival in Washington, IAJE  in Long Beach (all of them USA), as well as at the  North Sea Jazz (Netherlands) , Jazz  Vienne (France) and Umbria Jazz (Italy). In 2005, Tineke  participated in the “Billie and Me” project, a musical tribute to Billie Holiday with Terri Lyne Carrington, Nancy Wilson, Dianne Reeves and Joan Osnborne . They toured throughout the USA and played at the Carnegie Hall (New York), Kennedy Center (Washington), UCLA Royce Hall (Los Angeles), Orchestra Hall (Chicago), Byham Theatre ( Pittsburgh, Eisenhower Auditorium-Penn State (University park). Tineke joined  the international tour of the Terri Lyne Carrington Group  (Geri Allen, Esperanza Spalding, Matthey Garrisson, ea). They played at the Red Sea Jazz Festival in  Eilat,( Israel), Beantown Jazz Festival in Boston (US) , the  International Jazz Festival, in Münster (Germany),  at Ronnie Scott’s, London  (UK), Tokyo Jazz Festival and in the Blue Note in Tokyo (Japan) .In 2009 Tineke was asked to join the Geri Allen Trio (The Hague Jazz Festival)Tineke was also guest soloist with Esperanza Spalding  at the  Bimhuis (Amsterdam, Netherlands) in 2008, at the North Sea Jazz Rotterdam (Netherlands)  in 2009 and at the Carnegie Hall,  New York, (US) in 2009. In her home country  (The Netherlands), Tineke worked with the free jazz Dutch drummer legend Han Bennink and Bassist Ernst Glerum.  At other concerts,  organised by “Jazzimpuls” Tineke performed with Fleurine (“Tribute to Duke Ellington”) Anne Chris and the Turkish native singer Esra Dalfidan. Tineke performed with Esperanza Spalding at the North Sea Jazz Festival (Rotterdam), Carnegie Hall (New York), The Bimhuis (Amsterdam).Tineke tours regularly with the French pianist Cedric Handriot and the Dutch pianist Jasper van’t Hof (PiliPili-project). Tineke also plays regularly with drummer Pablo Pietro In Mexico. 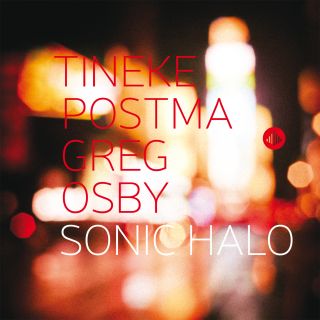 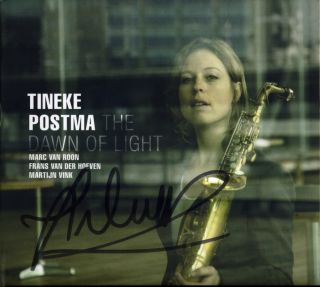 The Dawn of Light (Signed)

Marc van Roon/Tineke Postma
Product is no longer available
16-10-2020 Jazzism
"Own spin on Charlie Parker, this swinging new album."
16-10-2020 Jazzism
"The choice of repertoire is refreshing: not only well-known pieces, but also less current work such as Bongo Beep and Stupendous. In Lover Man we fall from our seats, Tineke Postma plays such a fantastic solo."
25-09-2020 nederlands dagblad
""The beauty of jazz? That it is not tied to age", said drummer Eric Ineke."
24-09-2020 Rootstime
"It is clear that Parker's music is still alive and certainly in the hands of such outstanding performers and arrangers present here."
18-09-2020 Jazznu.com
"

"
12-09-2020 All about Jazz
"This was a highly professional performance of Parker material, much of which appears on their recording What Kinda Bird Is This?— The Music of Charlie Parker."
10-09-2020 Jazzenzo
"... great swinging playing by drummer Ineke. Every tap is a hit and he is constantly alert and not too overbearing."
10-09-2020 Jazzism
"The fun radiated from the stage, Ineke, together with Beets, provided unremitting thrust, which was a pleasant solo for Van Bavel, Postma, Cleaver and Dijkhuizen."
04-09-2020 Het Parool
"Ineke Jazz Express does justice to Parker. The group swings like hell, with Ineke and Beets as boosters and the soloists fully up to their task."
28-08-2020 Jazzhalo
"Very passionate and gives pleasure from the first to the last note ."
11-12-2015 NRC Next
"["].. Tineke also knows how to play her male colleagues off the stage.""
10-12-2015 De Volkskrant
"[ ...] The growth that ​​jazz saxophonist Tineke Postma has made is admirable. In no time did the 36 year-old Frisian not only reach the top of the Dutch scene, but she also reached into the international jazz. Rightly the jury of the Buma Boy Edgar Prize saw Postma's combination of cosmopolitanism and Dutch sobriety. ,,How a basically modest Frisian built up a musical career in the United States with her own band and collaborated  with not the least of them" the jury says [ ...]"
09-12-2015 De Volkskrant
""In New York she went straight to the big stages, today jazz saxophone player Tineke Postma (37) will receive the Boy Edgar Prize. "Depth with very few notes, that's my goal.""
01-10-2015 Doctor Jazz Magazine
"[''].. "What is strinkingl with Tineke Postma," says the jury, " is the combination of cosmopolitanism and Dutch sobriety.""
28-06-2015 NRC Handelsblad
""The Buma Boy Edgar Prize 2015, the most prestigious award in the Netherlands in the field of jazz and improvised music, is awarded to composer and saxophonist Tineke Postma.""
27-06-2015 De Volkskrant
""This year, saxophonist TIneke Postma won the Buma Boy Edgaraward, the most important Dutch jazz award. The jury praised her combination of cosmopolitanism and Dutch modesty, her personal style and sense of melody.""
26-06-2015 Trouw
""Yesterday, Tineke Postma received the Boy Edgaraward, the most important Dutch jazzaward." "
01-02-2015 Downbeat
""It's been a treat to watch gifted 36-year-old Dutch saxophonist Tineke Postma mature over the past decade, and this collaboration with one of her mentors, Greg Osby, reflects another intriguing phase in her development."

"
11-12-2014 Jazzed Magazine (USA)
""Sonic Halo is a compelling set of tightly performed, wonderfully played, inspired, and dryly witty post bop" "
30-11-2014 Radio Dreyeckland
"A musically exciting and varied release"
26-11-2014 Jazzthetik
"4 out of 5 stars - Jazz full of its lively interactions."
11-11-2014 Jazz in Europe (online magazine)
""There are not many records in which the two soloists play both alto and soprano sax. That makes this CD already special." "
31-10-2014 Jazzpodium
"Here the focus is on the music which is consistently well done!"
27-10-2014 Jazzthing
"Two voices of alto- and sopranosaxophone which ensanre, complemente and challenge each other "
01-10-2014 Jazzism
"A conceptual album which everyone's comfort zone is exceeded and musicians each set the bar at a very high level."
15-09-2014
"'No empty stories, but pure music'"
12-09-2014 Jazzmozaiek
"Although they both play alto and soprano sax, you certainly hear contrasts of each with its own voice, sometimes very energetic, then deducted again, but always confrontational."
26-08-2014 Jazzenzo
"Tineke Postma gives melodies the right color of tone, which she explores in depth and use them for improvisations to add beautiful details."
06-08-2014 De Standaard
"The music breaths contemporary postbop and is accomplished with flair."
18-07-2014 Jazzflits
"Postma was more melodic and intuitive, Osby was more technical, abstract. They complemented each other beautifully."
23-06-2014 Jazzflits
"The Tineke Postma Quartet played solid as a rock, which was partly due to the excellent pianist Marc van Roon."
16-12-2013 Jazzflits
"Pregnant Tineke Postma sets Greg Osby on fire"
15-02-2013 draaiomjeoren.blogspot.nl
""Playing on the alto and soprano sax, let the mouths open regularly of admiration for Postma's
phenomenal technique""

Tineke Postma - Before the Snow