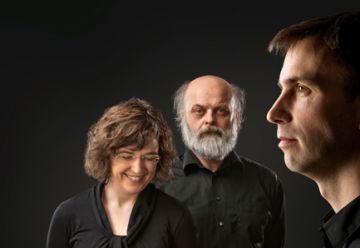 The Goeyvaerts String Trio was founded in 1997 and focuses exclusively on 20th- and 21st-century repertoire. It owes its name to the late Flemish composer Karel Goeyvaerts (1923-1993) who played a key role in the fundamental changes in European new music. The programmes performed by this trio are chiefly constructed around the extensive and extraordinary repertoire for string trio, supplemented by new works by Belgian composers.

In addition, the musicians of the Goeyvaerts String Trio are collaborating with art historian Stef van Bellingen on a project entitled ‘Klankkleuren’ (Sound colours), in which the relationships between music and the plastic arts are explored, using comparative parameters. The Goeyvaerts String Trio was awarded the 'Trofee Fuga 2003', a prize given annually by the Union of Belgian Composers for their unflagging dedication to the national repertoire.

As a trio they also try to perform new music in an adequately informed way, collaborating with composers such as Peter Swinnen, Giya Kancheli and performers such as Alexander Ivashkin (cellist and biographer of Alfred Schnittke), Henk Guittart (Schoenberg Quartet), 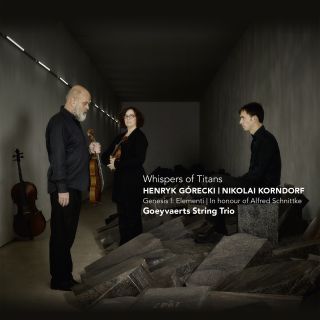 Henryk Górecki
€ 19.95
Add to cart
Product is on stock 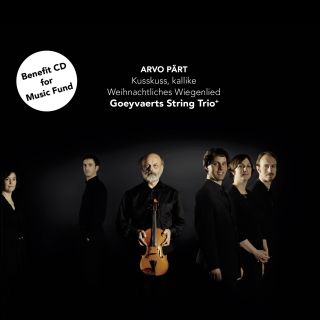 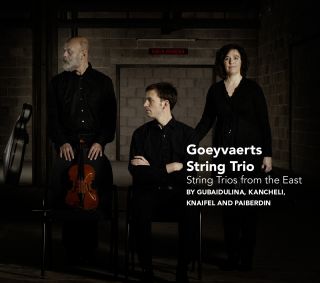 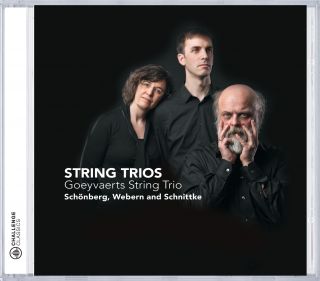 Arnold Schönberg, Anton Webern, Alfred Schnittke
€ 12.95
Add to cart
Product is on stock
01-11-2016 Music Emotion
""The second work, 'Chorale-Toccata-Aria', from the Russian Nikolai Korndorf is way more accessible, persumably for a lover off the harmony as me, but where the textbook - wonderful! - has an enormous input.""
16-06-2016 Gramophone
""What, then, to make of 'Genesis I: elementi per tre archi,' Op 19 No 1, the opener on the Goeyvaerts String Trio’s new disc of 20th-century Polish works? Dating from 1962, this scrabbling and violent one-movement work is early Górecki, but it’s also typical Górecki – more so, at any rate, than that Third Symphony. He wrote it just after his return from Paris, where he had made contact with Boulez and other enfants terribles of musical modernism, and in it attempted to lay out a new type of composition. What emerged was music moulded not from notes but from noise and an artillery of extended playing techniques: no picnic, then, for either players or listeners, but original for its time. In this brave and uncompromising performance, the Goeyvaerts certainly make it snarl.
Then, by way of a peace offering, they play In Honour of Alfred Schnittke written, in 1986, by the little-known composer Nikolai Korndorf. For lovers of the Tavener-Pärt aesthetic, it’s like stepping into a warm bath." "
15-06-2016 Irish Times
"Short playing time — 47 minutes — but intense music-making."
14-06-2016 NRC Handelsblad
""[...] The excellent Goeyvaerts Trio takes a brave choice with this intens performed repertoire. [...]""
01-06-2016 klassiekezaken
""it knows to translate Gorecki's partiture extremely responsive.""
06-05-2016 Luister
"" [...] Also the mucisians have no trouble crossing the line of euphony [...] ""
27-04-2016 de standaard
""[...] On the armoured harmony's, the players have put a fascinading stain. that makes the music move to noise. [...]""
24-11-2015 Cobra.be
"''The trio chose to play the Stabat Mater from Arvo Pärt in the less current used just intonation version in an attempt to get to an intens version without vibrato.''"
01-09-2015 Fono Forum
"extremely vigorous recording"
07-12-2014 Klassiek Centraal
"This renowned and second oldest music award in the world of Classical music is awarded to the best musicians for the best productions. Between all those big names one Belgian production stood out in the chamber music category: Goeyvaerts String Trio (Pärt, Moody - Stabat Mater, Simeron)!"
27-10-2014 Rondo Magazine
"The performance of the string trio and the vocal trio is brilliant: all six musicians perform with a pristine timbre and in perfect harmony."
01-09-2014 International Record Review
"The performers crafted an interpretation of mesmerizing intensity"
28-08-2014 http://audaud.com/
""This is a wonderful performance and recording. Listeners who connect with the somberness and spirituality of Pärt will feel right at home.  Highly recommended!""
08-08-2014 Pizzicato
""Two works about mourning Jesus Christ after crucifixion, beautifully played and sung. The atmosphere of the performances is sublime and moving""
01-08-2014 Audiophile Audition
"This is a wonderful performance and recording. Listeners who connect with the somberness and spirituality of Pärt will feel right at home. Highly recommended!"
01-08-2014 Quadrevisie.nl
"Concerning the Strabat Mater by Arvo Pärt, this version claims the title...."
31-07-2014 Choir & Organ
"The excellent Goeyvaerts String Trio - using just intonation - give the performance an ethe-real quality, which combines with the wonderful clarity and blend of the three singers for a simply stunning performance."
22-07-2014 Grammophone
"Editor's Choice

The absolute control and pinpoint perfection required by pieces such as these is masterfully achieved: the result is incredibly, movingly, beautiful."
01-07-2014 Luister
"The extreme precision and purity of this rendition is a real revelation"
20-06-2014 pizzicato
"Two works about mourning Jesus Christ after crucifixion, beautifully played and sung. The atmosphere of the performances is sublime and moving."
09-06-2014 Music Emotion
"The result is [because of the just intonation] that the Stabat sounds very serene and extremely pleasant."
07-05-2014 Musicalifeiten
"The spiritual intensity of the music is powerful. Also notable is how carefully and in detail the whole album sounds."
30-04-2014 Platomania
"The three singers, as well as the string trio, delivers a flawless performance in consonance and soloist in this highly exposed work."
24-04-2014 Plato Mania
"The three singers, as well as the string trio, deliver in consonance and soloist in this highly exposed work a flawless performance, the first high-risk but pure splash commitment sung by soprano should be also stated"
11-04-2014 The Independent On Sunday
"It's the contrast between the high voices' purity and the subtle dissonances of the strings which deepens the sense of suffering redeemed by faith."
01-07-2012 International Record Review
"The Goeyvaerts String Trio's overall characteristics as performers come clearly into focus: precise, unsentimental, challenging, self-denying, controlled and fastcinating."