Unrivalled for its formidable reputation in the fields of both early and new music, The Hilliard Ensemble is one of the world's finest vocal chamber groups.  Its distinctive style and highly developed musicianship engage the listener as much in medieval and renaissance repertoire as in works specially written by living composers.

The group’s standing as an early music ensemble dates from the 1980s with its series of successful recordings for EMI (many of which have been re-released on Virgin) and its own mail-order record label hilliard LIVE, now available on the Coro label; but from the start it has paid equal attention to new music.  The 1988 recording of Arvo Pärt’s Passio began a fruitful relationship with both Pärt and the Munich-based record company ECM, and was followed by their recording of Pärt’s Litany.  The group has recently commissioned other composers from the Baltic States, including Veljo Tormis and Erkki-Sven Tüür, adding to a rich repertoire of new music from Gavin Bryars, Heinz Holliger, John Casken, James MacMillan, Elena Firsova and many others.

In addition to many a cappella discs, collaborations for ECM include most notably Officium andMnemosyne with the Norwegian saxophonist Jan Garbarek, a partnershipwhich continues to develop and renew itself, and Morimur with the German Baroque violinist Christoph Poppen and soprano Monika Mauch.  Based on the research of Prof. Helga Thoene, this is a unique interweaving of Bach’s Partita in D minor for solo violin with a selection of Chorale verses crowned by the epic Ciaconna, in which instrumentalist and vocalists are united.

The group continues in its quest to forge relationships with living composers, often in an orchestral context. In 1999, they premiered Miroirs des Temps by Unsuk Chin with the London Philharmonic Orchestra and Kent Nagano.  In the same year, James MacMillan’s Quickening,commissioned jointly by the BBC and the Philadelphia Orchestra, was premiered at the BBC Proms.  With Lorin Maazel and the New York Philharmonic, they performed the world premiere of Stephen Hartke’s 3rd Symphony which was subsequently premiered in Europe by the Deutsche Radio Philharmonie Saarbrücken Kaiserslautern and Christoph Poppen. They have also collaborated with the Munich Chamber Orchestra with a new work by Erkki-Sven Tüür.  In 2007 they joined forces with the Dresden Philharmonic Orchestra to premiere Nunc Dimittis by the Russian composer Alexander Raskatov, also recording this for ECM. In 2009 worked with the Arditti Quartet performing a substantial new work, Et Lux by Wolfgang Rihm.

A new development for the group began in August 2008 with the premiere at the Edinburgh International Festival of a music theatre project written by Heiner Goebbels in a production by the Théâtre Vidy, Lausanne: I went to the house but did not enter.  This has subsequently been presented throughout Europe and the US.

With the release of their third collaboration with Jan Garbarek on the ECM label, Officium Novum,the group  continues to tour extensively in Europe.  The composer Alexander Raskatov features highly in their planning as does a new work by Nico Muhly which they will tour with the viol group Fretwork. In 2013 their album Prayers and Praise is released on Challenge Classics. 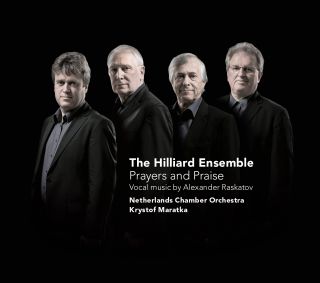 Alexander Raskatov
€ 19.95
Add to cart
Product is on stock
08-11-2019 Mania
"Despite the strongly contrasting musical interpretations, mixes the sacred music of the four singers with Jan Garberek's soprano sax improvisations in the spacious acoustics of the cathedral into a fascinating radio play."
20-12-2014 De Standaard
""The quartet with their unmatched sound made old and new music trendy."

"Hilliard represents passion and craftsmanship. Moreover, their sharp sound was so unique that you would recognize it from the first bars."

"Their tours were always ambituous in scope and program."