Ensemble for Medieval Music Berlin
Amanda Simmons, Gaby Bultmann, and Leila
Schoeneich founded Ensemble Triphonia in
2004 because of their mutual passion for
medieval music. They studied in Berlin,
Amsterdam, Milano and Bloomington/USA.
It is their wish to perform this music, with all
its variegation and expressivity, in such a way
that listeners may better understand and
enjoy their experience. Triphonia developed
a performance style based on the use of
original sources and research, together with
the desire to improvise and discover new
possibilities of variation, a practice which also
played a great roll in performance practice
in the Middle Ages. Triphonia has since cre-
ated various thematic concert programs, for
example a musical pilgrimage to Santiago de
Compostela with many musical stations along
the way from Bingen on the Rhine river via
Paris, southern France, and northern Spain
(this program is also in a scenic version with
projected pictures, dialogues, and props) or
the Christmas program "Mit vrouden quam
der engel" (The angel came rejoicing) with
gregorian chant and medieval songs from
Germany, England, Italy, and France. One
of Triphonia's main emphases is in the use
of many different combinations of instruments
in their accompaniments of the mostly
monophonic melodies, as well as the reconstruction
of lost melodies through the use of
related sources. Ensemble Triphonia utilizes
a wide range of instruments: romanesque
harp, psaltery, medieval recorders, pipe and
tabor, stringed tabor, vielle, medieval brass
bells, portative organ, hurdy-gurdy, medieval
dulcimer, and various percussion instruments.
Along with an occasional purely instrumental
piece - sometimes self-composed in the
style of existing medieval pieces - Triphonia
places the highest priority on the instrumentation
and accompaniment of the vocal
songs. Various techniques are applied to
accompany the solo voice or instrument
such as drones or additional improvised vocal
or instrumental parts, creating a unique
polyphonic, heterophonic, or homophonic
version of an original monophonic melody. 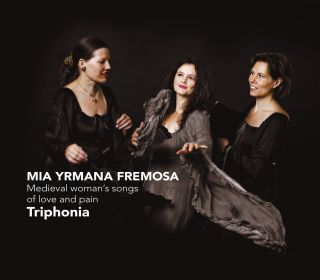