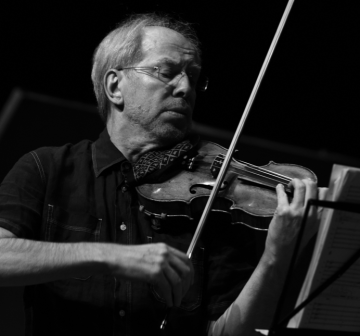 The Hungarian composer and pianist Stevan Kovacs Tickmayer from the Serbian province of Vojvodina has written eight hymns in commemoration of the film director Andrei Tarkovsky, an artist he has called a homo moralis whose remarkable visions cast a small but significant light on the tragic world of the previous century. The Georgian composer Giya Kancheli has written a silent prayer for two dear friends: the cellist and conductor Mstislav Rostropovich and the violinist Gidon Kremer. The meditative emotionality of the hymns and the ascetic tranquility of the prayer are offset by César Franck‘s Piano Quintet in F minor like a premonition of Beethoven’s Appassionata, whose second movement, marked Lento, molto sentimento, in turn takes up the mood of the other two works. This combination does more than provide a superficial contrast: it is beholden to an intrinsic principle of the sort that the painter Paul Klee developed in his theory of harmony in the visual arts: any compositional harmony will gain character through dissonances, with the balance being restored by counterweights. (from the liner notes)

This album “Hymns and Prayers” from master violinist Gidon Kremer and his Kremerata Baltica spans a characteristically wide range of music, from the spirited to the spiritual, all of it broached with conviction. The three featured works were recorded in 2008 at the Lockenhaus Festival, that annual event which ECM helped to put on the map a quarter-century ago, when Kremer and producer Manfred Eicher introduced the Edition Lockenhaus on ECM New Series.

Intensity and concentration, differently calibrated, are the watchwords here. At the centre of this disc is César Franck’s piano quintet, a work which ranks alongside the Brahms Quintet as one of the outstanding – and technically daunting – works of the late 19th century. It is a work that Gidon Kremer holds in special affection: it was one of the first pieces of chamber music in his own repertoire, and he performed it in Latvia when he was 16.

Kremer and Giya Kancheli have a long association that has already resulted in several recordings on ECM, including “Lament: Music of Mourning in Memory of Luigi Nono” (recorded 1998) and “Time...and Again” (1999) and “V & V” (2000) on the album “In l'istesso tempo”.

"Silent Prayer" was composed on the occasion of the 80th birthday of Mstislav Rostropovich and the 60th birthday of Gidon Kremer in 2007. After Rostropovich’s death that same year, the composer entitled the just-finished work "Silent Prayer." The world premiere took place on 7 October 2007 at the Kronberg Cello Festival which was dedicated to the memory of the late virtuoso, with Gidon Kremer and the Kremerata Baltica.

Kremerata Baltica will again be performing Kancheli’s “Silent Prayer” on their North America tour this autumn. Earlier performances have been much praised by critics. “The spare and ruminative music seems to drift off the stage with infinite slowness, like a mist. Kremer and his colleague, floating wispy lines from the highest reaches of their instruments, were compelling guides to this ethereal landscape”, wrote Jeremy Eichler in the Boston Globe.

Long a champion of original compositional voices, Kremer here presents also music of Stevan Tickmayer, born in the former Yugoslavia in 1963, and currently a resident of France. A musician of diverse background, Tickmayer has been studying with Kurtág since the mid-90s, and has had his own work played by ensembles from the Netherlands Wind Ensemble to the Moscow Soloists – but he has also collaborated with improvisers and avant-rock players including Chris Cutler, Fred Frith and Peter Kowald. On Kremer’s invitation he was composer in residence at Lockenhaus in 2003 and 2009.

Tickmayer began his “Eight Hymns” in December 1986, on learning of the death of his favourite filmmaker, Andrei Tarkovsky, and played the (unfinished) work in his solo concerts for several years. He revised it in 2003 after working with the musicians of the Kremerata, “the ideal messengers” – given their Eastern European backgrounds – for this musical mourning. The “Eight Hymns” is the first recording of Tickmayer’s music on ECM.

*
Gidon Kremer’s relationship with ECM dates back to Arvo Pärt’s album “Tabula Rasa”. This was followed by several volumes of live recordings from his famous Lockenhaus festival. Kremer’s second recording of the complete sonatas and partitas for unaccompanied violin by Bach, released in 2005 on ECM New Series, met with unanimous international acclaim. Kremerata Baltica which first appeared on ECM on the Kancheli record “In l’istesso tempo” (2005) made its official label debut in the same year with a highly original interpretation of Schubert’s G-major string quartet.

Founded in 1997 by Gidon Kremer, the Grammy-award winning chamber orchestra is one of the outstanding ensembles in Europe and beyond. Although it originally began as a "present to myself" to celebrate his 50th birthday in 1997, Gidon Kremer soon realized the potential of this ensemble of young musicians from the Baltic States of Estonia, Latvia and Lithuania as a medium with which to share artistic experiences, and, at the same time, to promote and inspire the musical and cultural life of the Baltics.

01-11-2017 Gramophone
"This is the survey to have, complete on two discs, and you get a fine transcription (for piano, percussion and strings) of Weinberg's 1944 Piano Quintet, providing a touchstone back to the wartime composer.
Strongly recommended."
31-05-2017 la boite a musique
"At the head of his legendary kremerata baltica, the Latvian violinist, which this year celebrates his 70th birthday the fascinating exploration of the music of the Russian-Polish composer Mieczysław Weinberg."
19-05-2017 Luister
"Luister 10! (highest ranking)
"Like expected, Kremer and his ensemble are more than ideal for the performance of the turbulent music by the composer who seemed to flout all musical rules.""
24-04-2017 Klassieke zaken
"Beautiful portrait of Weinberg"
11-04-2017 Nieuwe Noten
"A rightly rehabilitation for a wrongly forgotten composer of the last century."
24-03-2017 Nederlands Dagblad
"Violinist Gidon Kremer (70) is not yet finished playing!"
24-03-2017 Basia con Fuoco
"As expected, Kremer and his ensemble are more than ideal for the impetuous music of the composer who capriciously flouts the laws of music"
07-03-2017 Crescendo
"

(...) A great opportunity to discover someone who was without a doubt a major composer of the last century. (...)

Gidon Kremer and Kremerata Baltica are perfectly responding to the various moods of Weinberg’s Chamber symphonies and his Quintet. Technically stunning, the powerfully atmospheric playing is at times frighteningly intense.

"
18-01-2017 Opus Klassiek
"Weinberg has thanks again established a foothold underground with his music thanks to the insatiable hunger of a small group of performing and listening music fanatics. Gidon Kremer's such a fanatic, like Mate Bekavac, a brilliant clarinetist. Together, they make sure there are unforgettable moments that remind us that Mieczyslaw Weinberg  did not suffer for nothing."
10-05-2016 Opus Klassiek
""[...] Gidon Kremer is working a lot with and for the work of Kantsjeli for years now. Patricia Kopatchinskaja is a voilinfenomenom who appears to be born for this emotional journey [...]""
17-12-2015 Luister
"["].. In Twilight, written in 2004 for two violins and a chamber orchestra, Kremer is equally joined by Patricia Kopatchinskaja. The atmosphere of this work is no different from the Chiaroscuro one, but thanks to the solists, Kremerate Baltica and the finishing touch of the ECM-mastermind Manfred Eicher, it is yet again a vintage Kancheli." "
21-05-2014 Opus Klassiek
"The recording from  fantastic people such as Peter Laenger and Stephan Schellmann is of the same high level as the performance of Gidon and his Kremerata."
19-05-2014 Opus Klassiek
"There is no doubt about the exemplary level of these interpretations of this latest addition on the ECM label. "
05-05-2014
""Exciting, demanding and masterly played"
"
24-04-2014 Musicframes
"The violin takes you in a storytelling path through the whole stringorchestra. Vivacious played by Gidon Kremer"
22-04-2014 Luister
"He continues to move and amaze"
02-04-2014 Pizzicato
"With chamber and orchestral music in outstanding performances, this album is a convincing and precious plea in favor of Weinberg’s music."
16-09-2010 Volkskrant
"''Franck compelling quintet is by far the best work of the board, co thanks to andel khata Buniastisjvili the young pianist, who this season also stages a number of Dutch will be heard.'' "