Blind since birth, Nobuyuki Tsujii was joint-winner of the Nancy Lee and Perry R. Bass Gold Medal at the Van Cliburn International Piano Competition in 2009. Since winning the competition he has appeared at the Klavier-Festival Ruhr, the Aspen Music Festival, and the Ravinia Festival, given recitals in Washington, Indianapolis, Forth Worth, Houston and Abu Dhabi, and embarked on a major recital tour of Japan. Future plans include appearances with the BBC Philharmonic, Orchestra della Svizzera Italiana, Moscow Virtuosi Chamber Orchestra, and recitals in Berlin, Belgrade and Basel. At the age of 12, Nobuyuki Tsujii made his debuts at Tokyo’s Suntory Hall and Carnegie Hall’s Weill Recital Hall. Now 21, he has appeared as soloist with all the major Japanese orchestras including NHK Symphony, Yomiuri Nippon Symphony, Tokyo Symphony, Japan Philharmonic and Orchestra Ensemble Kanazawa, and worked with conductors including Vladimir Ashkenazy, Yutaka Sado and Vladimir Spivakov. Nobuyuki Tsujii has made a number of recordings for Avex Classics including Rachmaninov’s Piano Concerto No. 2 with the Deutsches Symphonie Orchester Berlin and Yutaka Sado, an all-Chopin recital disc, and a live DVD recording of his 2008 solo recital at Suntory Hall. He currently participates in the performer’s programme at the Ueno Gakuen College of Music in Tokyo. 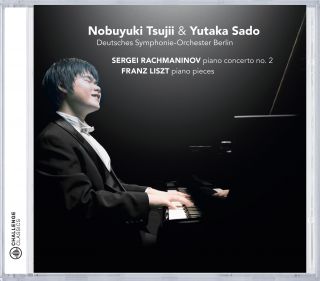