Marie Kuijken studied Piano, Chamber Music and Keyboard Accompaniment at the Royal Conservatory of Music in Brussels. In this same period she studied voice with Louis Devos, Margreet Honig (Amsterdam) and with Lena Lootens. As a soprano, Marie Kuijken works often together with La Petite Bande,  in productions such as the Passions of J.S.Bach, Vesperi della beata Vergine Maria  of Monteverdi and some intermezzi buffi in which she sings de female part. As pianist she specializes in the Mozart repertoire on pianoforte  (copy of Stein). In the Lied repertoire she is accompanied by her sister  Veronica; recently they performed Schumanns "Frauenliebe und Leben". In Italy, where she lives, Marie Kuijken is part of the baroque ensemble Il Fabbro Armonioso. She also continues the vocal study with L.Napoli. She was a guest of the Festival Barocco di Viterbo and the Festival 900 in Pescara. With cembalo player G.Catalucci she frequently performs in Amelia. She has been assigned to the Conservatory of Salerno as teacher in diction of foreign languages. 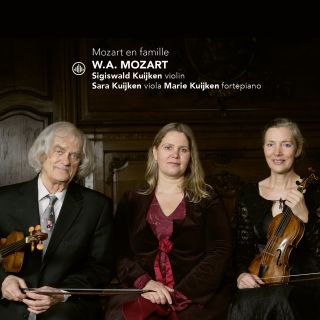 Johann Sebastian Bach
€ 19.95
Add to cart
Product is on stock
01-03-2011 Piano News
"This album should be a favourite in everyone's piano-discotheque."
Piano News
"A perfect package"