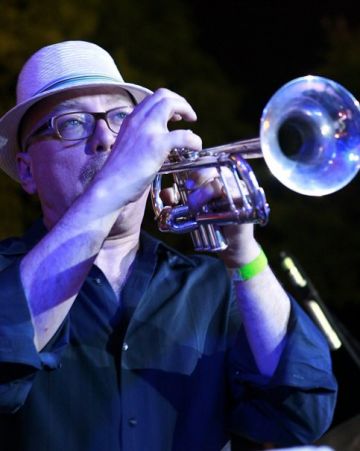 “This is a new millennium, and a lot of music has gone down,” Brian Lynch said several years ago. “I think that to be a jazz musician now means drawing on a wider variety of things than 30 or 40 years ago. Not to play a little bit of this or a little bit of that, but to blend everything together into something that has integrity and sounds good. Not to sound like a pastiche or shifting styles; but like someone with a lot of range and understanding.”

A vital force and emergent legend within both the hardcore straight ahead and Latin Jazz communities, Grammy© Award Winner Brian Lynch is as comfortable negotiating the complexities of clave with Afro-Caribbean pioneer Eddie Palmieri as he is swinging through advanced harmony with bebop maestro Phil Woods. A honored graduate of two of the jazz world’s most distinguished academies, Art Blakey and the Jazz Messengers and the Horace Silver Quintet, he has been a valued collaborator with jazz artists such as Benny Golson, Toshiko Akiyoshi, and Charles McPherson; Latin music icons as diverse as Hector LaVoe and Lila Downs; and pop luminaries such as Prince. As a bandleader and recording artist he has released 19 critically acclaimed CDs featuring his distinctive composing and arranging, and toured the world with various ensembles reflecting the wide sweep of his music. He currently is Professor of Jazz Trumpet at the Frost School Of Music, University of Miami as well as conducting clinics, residencies and workshops at prestigious institutions of learning the world over. His talents have been recognized by top placing in the Downbeat Critics and Readers Polls (#3 Trumpet 2011 Critics Poll); highly rated reviews for his work in Downbeat, Jazziz and Jazz Times; 2005 and 2007 Grammy award nominations, and grants from the National Endowment for the Arts, Chamber Music America, and Meet The Composer.

Born September 12, 1956 in Urbana, Illinois, Lynch grew up in Milwaukee, Wisconsin where he apprenticed on a high level with such local residents as pianist Buddy Montgomery and organist Melvin Rhyne, while earning a degree from the Wisconsin Conservatory of Music. Located in San Diego in 1980-81, he gained further valuable experience in the group of alto master Charles McPherson.

Towards the end of 1981, Lynch moved to New York, and soon linked up with the Horace Silver Quintet (1982-1985) and the Toshiko Akiyoshi Jazz Orchestra (1982-1988). Simultaneously, he played and recorded on the Latin scene with salsa bandleader Angel Canales (1982-83) and legendary cantante Hector LaVoe (1983-87). He began his association with Eddie Palmieri in 1987, and at the end of 1988 joined what turned out to be the final edition of Art Blakey and the Jazz Messengers. He began his association with Phil Woods in 1992, and also worked frequently with Benny Golson around this time.

In 1986, Lynch recorded his first album as a leader, Peer Pressure, for Criss-Cross. There followed Back Room Blues and At The Main Event[Criss-Cross], In Process [Ken], Keep Your Circle Small [Sharp Nine]), and a string of sideman dates with Art Blakey and Phil Woods. On each, Lynch documented his fiery, coherent tonal personality. Whether limning a ballad or tearing through a searing bop structure, he projects a rich tone that ranges from warm to brilliant, uncoiling serpentine lines that land in the most surprising places.

He also made a name for himself as a composer, through numerous songs that play with and stretch harmony while never losing melodic essence and rhythmic thrust.  In tunesmithing he’s much influenced by former employer Horace Silver.  “I look to get that clean sound that Horace’s compositions have.” he comments. “You can play complicated or simply on them, always with something that connects to the public.”  Art Blakey recognized Lynch’s skills, and recorded originals like “Chippin’ In,” “Chandek’s Den,” “Byrdflight” and “Green Is Mean” on albums for Timeless, A&M, and In-n-Out.

A 1997 recording called Spheres of Influence [Sharp Nine], which earned a 4-1/2 star Downbeat review, was Lynch’s first project to reflect the panoramic range of interests that influence his working life as a musician. During these years he documented cross-cultural investigations with Eddie Palmieri’s seminal Afro-Caribbean Jazz Octet on Arete, Palmas and Vortex [Nonesuch and RMM]. As the ‘90s progressed, he steadily refined his concept, eventually collaborating with Palmieri as an arranger, co-composer and musical director. In a rare gesture, Palmieri took advantage of Lynch’s pen on the recent albums La Perfecta II and Ritmo Caliente [Concord Picante]. The synchronistic nature of their relationship continues up to the present day with an acclaimed series of duo and trio concert performances, the creation of the Eddie Palmieri/Brian Lynch Jazz Quartet with tours of Japan and performances coast to coast in the US, and Palmieri’s culminating (and Grammy winning) collaboration with Lynch on his ambitious recording project Simpático for ArtistShare.

The fruits of his work in this area are now becoming apparent through a remarkable series of recordings.

Lynch’s touch with Afro-Caribbean interpretations of the American Songbook is on ample display in the 2009 release Bolero Nights for Billie Holiday (Venus), in which Lynch’s luminous arrangements of the Holiday repertoire are livened by the alto sax mastery of the great Phil Woods. On Conrad Herwig’s Grammy nominated The Latin Side Of Miles Davis [Half Note] and on Que Viva Coltrane [Criss Cross], a Herwig- Lynch collaboration, Lynch reharmonizes tunes like “Flamenco Sketches,” “Miles Mode,” “Wise One” and “Straight Street,” fluently navigating the changes over dynamic guaguanco, songo, bolero and timba beats.

The Spheres Of Influence ensemble has been well represented by a number of releases. The Dutch CrissCross label, which Lynch has been associated with for almost 25 years on, hosts Spheres for two strong releases, 2005’s ConClave where he’s joined by tenor saxophonist Ralph Bowen and pianist Luis Perdomo, and the new (2011) ConClave Vol. 2, featuring Cuban saxophonist Yosvany Terry among the rest of a recent Spheres lineup. Another release from 2005 by the Japanese label EWE, Spheres Of Influence Suite, showcases Lynch’s expansion of the Spheres Of Influence concept in a recording of a six part suite for a nine piece ensemble, commissioned by Chamber Music America and featuring the likes of Zenon, Handy, Prieto, and Perdomo.

On Fuchsia/Red, a live date from 2003, Lynch presented, in the words of critic Russ Musto in All About Jazz, “an electric Miles-inspired excursion conceived and executed with such assurance as to create a whole new perspective on Lynch’s artistry.” Musto added:  The music is alternately earthy, spacey, pretty, funky and swinging and often, just like Lynch, all of these things at once.”

But don’t think Lynch has forgotten about his roots. That he’s evolved into a major post-bop trumpet stylist is apparent on 2000’s Tribute To The Trumpet Masters [Sharp-9], an instant classic on which Lynch, blending superlative technique with deep soul, pays forward-thinking homage to trumpet lineage spanning Dizzy Gillespie to Woody Shaw. A natural extension of this concept came in the extensive new project dedicated to the underappreciated group of trumpet greats he calls the Unsung Heroes. The CD of the same name, released in 2011, garnered the “masterpiece” designation and 5 stars in Downbeat, making the top of the Best of 2011 list and marking an auspicious debut of Lynch’s own recording enterprise, Hollistic MusicWorks, which showcases Lynch’s innovations in “value-added” content for jazz recordings honed by his work with ArtistShare.

Other recent “straight-ahead” recordings include Brian Lynch Meets Bill Charlap [Sharp-9], a nuanced, interactive 2003 collaboration with the renowned pianist and long-time Woods bandmate. “It’s the kind of standard fare—ballads, bebop and blues—that is often lackluster in the hands of lesser bands, but brings out the best in these masterful musicians,” wrote Russ Musto in All About Jazz. Lynch also documented his touring units of recent vintage on a recital of mainstream and original repertoire in quintet with Miguel Zenon [24/7, Nagel-Heyer].

Seeking to share his knowledge with others and to keep in touch with the fundamentals of his art, Lynch has turned increasingly to teaching in recent years. He currently holds the position of Associate Professor of Jazz and Studio Music at the Frost School Of Music, University Of Miami, and has previously been on the faculty at New York University and the Prince Claus Conservatory (Netherlands). Brian has also conducted workshops in numerous major institutes of learning, including Harvard University, The Eastman School of Music, Dartmouth University, the University of North Texas, and Columbia University among many others. Many of today’s finest young jazz trumpeters call him a mentor. Brian is proud, but it works both ways: the interchange of ideas between he and the “youngbloods” challenges him to keep it real and keep practicing!

Lynch’s creative efflorescence since the millennium bears out the truth of a remark he made several years in the liner notes for the Spheres of Influence album.

After crediting Palmieri and Art Blakey as the Alpha and Omega of his musical thinking, Lynch stated: “Eddie inspired me to want to do my own thing, because that’s what he does, and how he energizes and leads the band. And being a Messenger is something that will never be taken away from me.  I can see Art sitting up there saying, ‘You’ve got to go on and be a leader.’ It’s easy to be a sideman; it’s very hard to be a leader. Now I’m ready.” 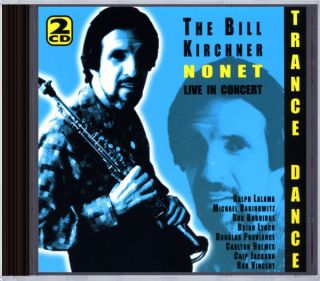