In their intensive years of study with Felix Andrievsky, Thorleif Thedeen, Sergiu Celibidache, Franz Beyer, the Amadeus Quartet and later with members of the Alban Berg and La Salle Quartets the young artists were confronted with the highest international standards. The Henschel Quartet were quartet in residence at both the Aldeburgh Festival (1994) and at the Tanglewood Music Festival (1995/1996). At the latter, they were coached by the legendary musicians Louis Krasner and Eugene Lehner, who had themselves worked with composers such as Béla Bartók and Arnold Schönberg, and, who gave the quartet unique insights into the works of the Second Viennese School. In 1995 the Henschel Quartet were prize-winners of no less than five prizes at International String Quartet competitions in Evian, Banff and Salzburg for the best interpretation of works ranging from Mozart up to contemporary composers. In 1996 they won the first prize and gold medal at the coveted Osaka International String Competition. Highly acclaimed debut concerts in many of Europe's prestigious concert halls helped to firmly establish the Henschel Quartet as one of today's leading string quartets. Constant critical acclaim has led to an impressive international career.

This season’s engagements include amongst others tours of USA, Mexico, China, Japan, Germany, Italy, Spain, Scandinavia, and England. In March 2010 the Henschel Quartet had the great honour to perform for Pope Benedikt XVI in Vatican celebrating the Holy Fathers nameday. The Henschel Quartet has recently played its third BBC Proms appearance, the Premiere of a newly discovered string quintet by Max Bruch at the Wigmore Hall London, appeared at Brussels Bozar as “Cultural Ambassadors” for Germany and performed at the re-opening of the Anna-Amalia Library in Germany (UNESCO World Culture Heritage). The Henschel Quartet has been invited to present its fourth concert at the Royal Spanish Palace Palacio Real on the set of the 4 Royal Stradivarius instruments in March 2012. In June 2012 the Henschel Quartet as the first European string quartet in 20 years will perform a complete Beethoven cycle at Suntory Hall Tokyo - the founding members Christoph Henschel, Monika Henschel and Mathias Beyer-Karlshøj since 2010 joined by the acclaimed chamber-musician, soloist and long-term member of the Berlin Philharmonic Orchestra, Daniel Bell of the celebrated Petersen Quartet.

In addition to performances as a quartet, they also appear regularly with other musicians. Amongst those who have performed with the Henschel Quartet are members of the Amadeus Quartet, Sharon Kam, Till Fellner, Anna Gourari, Julie Kaufmann, Christian Elsner, Magdalena Kozena and on a permanent basis with trio con brio Copenhagen. Each summer the Henschel Quartet presents its own festival in the old monastery of Seligenstadt in Germany. In 2007 this festival at “Germany`s nicest open air venue” (Frankfurter Allgemeine Zeitung) celebrated its 10th anniversary. Since 2006 the Henschel Quartet has established itself as permanent ensemble-in-residence at the Hindsgavl Festival in Denmark.
The Quartet's teaching activities takes them to major conservatories at home and abroad, to American universities as e.g. the MIT Boston, Boston Conservatory, the University of California, in Australia to the Victorian College of the Arts Melbourne and other Melbourne faculties, in England to the Dartington Summer School. In 2010 the Henschel Quartet has found an incorporated society supporting projects for the promotion of the arts. Along with the ministry of education of Bavaria the Henschel Quartet`s society in February 2010 introduced culture sponsorships by Rotary Clubs for students.
On the new prize-winning CD label NEOS Music has released Max Bruch´s newly discovered string quintet  (CD of the Year 2009 on the International Music Web) and Manfred Trojahn string quartets (CD of the Month 4/2010 IMW). The Henschel Quartet’s recording of Beethoven String Quartet’s op 18/6 & op 127 at SONY BMG continues to receive critical acclaim from the international press.
The Quartet’s discography includes Respighi's "Il Tramonto" and selected pieces by Schulhoff with the mezzo-soprano Magdalena Kozena on the Deutsche Grammophon label (Preis der deutschen Schallplattenkritik). The Ginastera production was released to great critical acclaim by Gramophone. The release of Mendelssohn's Complete String Quartets on the Arte Nova/SonyBMG label was nominated for the MIDEM Awards in Cannes 2006 as well as also receiving the accolade of “Recording of the Year” 2005 by Michael Cookson on International Music Web. It was ranked No.1 in the Top 10 classical CDs on the HMV Charts in Japan in 2006 and 2007.
In 2006 the Henschel Quartet was officially appointed musical Ambassadors of the SOS Children`s Villages. 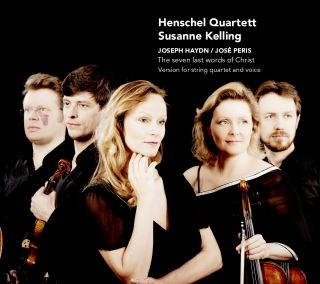 Franz Joseph Haydn, José Peris
€ 19.95
Add to cart
Product is on stock
25-06-2013
""The magnificent Henschel Quartet plays as if they were one person. They are passionate, accurate, and musically sophisticated. I was astounded at the quality of their performances." - Oscar and Pulitzer prize winner John Corigliano on the all Christopher Theofanidis programs at Carnegie Hall & Yale University, February 2013
"
20-01-2013 Sunday Times
""...the brilliance of the manoeuvre (Op.59/1) gave me a moving surprise in the captivating account by the HENSCHEL QUARTET - a jolt paralleled by the irruption of exploratory recitatives before the tragic-hued, inevitable surprise of the Op. 132...""