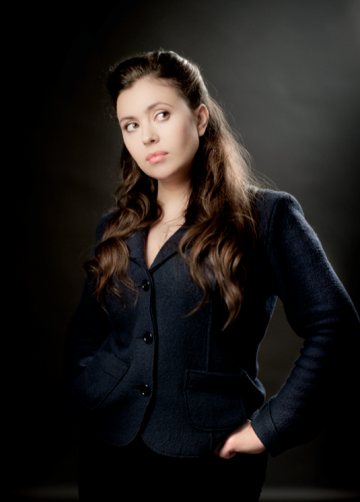 Olga Domnina is a Gold Medal graduate of the Gnesin Academy of Music in Moscow in the class of Mikhail Arkadiev, which followed her study at the Gnesin College in the class of Andrei Khitruk.In June 2009 she completed the two-year “Diploma in Performance” course of postgraduate study at the Royal Academy of Music in London with Prof Hamish Milne, for which the Academy had granted her a merit scholarship. At RAM she won the Macfarren Prize for Best Solo Recital, awarded previously to Sir Clifford Curzon and Dame Myra Hess.

A native of Moscow, Miss Domnina began her piano studies at the age of 7. Whilst still at the Gnesin, she parti- cipated in a number of international piano competitions, going on to win the San Bartolomeo competition in Italy and taking an honours diploma at the Maria Canals competition in Spain. She also performed numerous solo concerts, at such venues as the Rachmaninov Hall of the Moscow Conservatory, as well as with chamber and symphony orchestras, including Novaya Opera Orchestra in Moscow under the baton of Jan Latham-Koenig and Pacific Symphony in Vladivostok under the direction of Mikhail Arkadiev.

Since moving to London and entering the Royal Academy of Music in 2007, Miss Domnina has been dividing her time between England and Italy. She has collaborated with such internationally acclaimed artists as the violinists Julian Rachlin and Viktor Tretyakov, the violist Paul Silverthorne and the cellist Thomas Carroll.

In October 2011 she attained international acclaim with the world premiere performance of Vladmir Genin’s piano cycle “Seven Melodies for the Dial” at the Moscow House of Music.

04-11-2013 russischemuziekinnederland.wordpress.com
""The whole range of colors, associations of sounds and musical reminiscences passed. The mighty chimes, soft but irrevocable course of a clock, the merciless blows of an alarm, the transparent Bachiaanse fugues and ecstatic danse macabre, - the Seven melodies of Genin provided enough for the thought, even for a non -philosophical listener""
20-10-2013 www.opusklassiek.nl
""For the play of Olga Domnina only one word fits: formidable""
01-10-2013 Luister
"Physically, technically and emotionally this is a very heavy piece. The first three months I thought it was impossible to learn it by heart and feel the freedom to really play.


"
17-07-2013 Musicweb-international.com
"Olga Domnina is the dedicatee of Seven Melodies for the Dial, and there it speaks for itseld that her performance is stunning. She not only tackles the music’s technical demands with apparent ease, but also infuses every moment with emphatic and unpretentious expressiveness - no matter how sparse or dense the texture, how soft or tumultuous the mood."
08-07-2013 Mpodia
"Olga Domnina about "Seven Melodies for the Dial":

"When the music has convinced you, then you can also convince others with it. It is very energetical music, so the audience can catch the "meaning" of this piece immediately I think""
28-05-2013 http://www.classical-cd-reviews.com
"Olga Domnina, for whom the piece was written, gives a passionate and vigorous interpretation."
16-04-2013 Horeindruck
""One can hear that she knows exactly how to master the grand piano and enable the wide range of tonecolors.""
01-11-2012 Piano News
"It's a suspense-packed new piano cycle in a terrific interpretation."