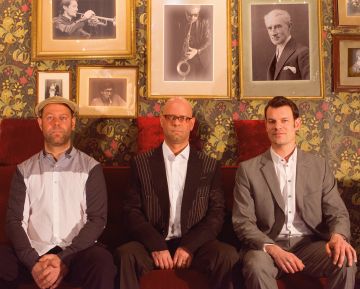 VEIN Trio already has a reputation as “one of Europe’s most exciting ensembles”, according to John Fordham, of The Guardian. With Symphonic Bop, recorded with the acclaimed Norrbotten Big Band Orchestra under artistic director Joakim Milder earlier this year, and the ensemble’s thirteenth album, VEIN expands its range beyond the crystalline precision and intimacy of the small ensemble to the awesome power and depth of an internationally acclaimed jazz orchestra. It’s like seeing your favourite movie on a bigger screen.

What makes this work stand out among works for jazz orchestra is that, though it uses the power of a jazz orchestra to the full, VEIN’s small-group heritage and identity ensure that the delicacy and texture of Individual instrumental colours and lines are never obscured by the full weight of the orchestra. VEIN’s pianist, Michael Arbenz, who arranged and orchestrated all six tracks, explains: “The big band is an extension or an orchestration of the trio, which adds all the colours of a Big Band without losing the flexibility and the interaction of the trio.” The atmosphere of the classical orchestra can also be heard through the arrangements: “The inspiration for the arrangements comes more from the symphonic tradition than the big band,” says Michael Arbenz. The result is an album with the rhythmical subtlety, the melodic invention, and the sensational ensemble playing of VEIN’s trio albums, but with the heft and depth of an orchestra. Truly the best of both worlds.

The three permanent members of VEIN Trio all contributed new pieces on the album, and the outstanding feature of Symphonic Bop is its diversity of style and mood. Florian Arbenz’s composition, “Boarding the Beat”, a fifteen-minute suite, explores the colours of the jazz orchestra in exquisite depth and detail. A delicate introduction, showcasing the orchestra’s subtler textures, yields to passages of luminous brass harmonies, underscored by Robert Noldmark’s sinuous tenor saxophone melodies, and the indignant soprano of Håkan Broström, while Mats Garberg’s trilling flute insinuates its way irresistibly through the instrumental lines. The orchestral colours are almost Mahlerian, but this is balanced by a jazz ensemble’s rhythmic tension, and the throb of the beat that the piece announces.

Bassist Thomas Lähns’ composition Willi’s Pool turns the serious mood into on its head with a mind-warping fantasy of outrageous glissandi and distorted resonance. Lähns’ own bass, plucked and bowed, combines with the virtuosic trombones of Andrea Andreoli and Arvid Ingberg to conjure a surreal and highly inventive piece that challenges the limits of the acoustic sound-world, yet does so with humour and poise.

Fast Lane, by Florian Arbenz, is a trio piece, opening with piano and drums engaged in a fast pursuit of each other, followed swiftly by the bass, in a stream of lightning interactions so assured the individual instruments blur into a haze of chords. It’s the jazz trio tradition, but accelerated to warp speed, harmonic lines blurred in an exhilarating haze.

Michael Arbenz’ tune Under Construction is a masterclass in how the rapid-fire trio dynamic can set a whole orchestra alight. Rapid chord changes, syncopation and slick orchestration build a dynamic platform for shredding solos from first bass, then piano. Finally, Arvid Ingberg monsters a trombone solo that builds and builds, a move that concludes with an erie, plaintive statement on soprano sax.

Michael Arbenz then changes the dynamic completely with Passacaglia, an atmospheric chamber piece in which gossamer piano chords are joined by first delicate bass, then saxophone and wind, becoming an instrumental chorus of transcendent, contemplative tranquility.

The last tune, Florian Arbenz’s Groove Conductor, ironically shows how much you can fit into a ten-minute big band piece. Touches of funk in the driving brass melodies, and a bassline, with Petter Olofsson’s through-the-floor electric bass solo, that would honour a drum n’ bass club night. Flirting with the harmonies throughout is the atmospherically grimy tone of Danne Johansson’s  trumpet solo, complementing the dark yet sophisticated mood.

This is a deceptively simple title for an album that, in six compositions, covers avant-garde jazz to contemporary chamber music, and the ground in between, offering an important statement of jazz and its centrality in contemporary musical culture.

A classically-trained pianist and self-taught jazzperformer, Michael Arbenz brings the passionate curiosity of his self-directed investigations in jazz to the rigour of his classical performance practice. After studying classical piano in Basel, Michael Arbenz’s international classical career has included collaborations with Pierre Boulez, Heinz Holliger, Jürg Wyttenbach and the Swiss new music ensemble Contrechamps. Discovering a love of jazz as a child, his self-guided exploration of both the techniques of improvisation and the history of jazz was fresh and personal, and his approach to improvisation is multilayered rather than linear, using the piano as an orchestra. His jazz influences are very eclectic and include major jazz pianists across the history of the music, as well as colours and ideas from classical music. He has performed widely with the acclaimed VEIN trio, and has collaborated with international stars including Greg Osby, Glenn Ferris, Dave Liebman, Marc Johnson, Wolfgang Puschnig, and Andy Sheppard.
Michael Arbenz also works as a composer and arranger and teaches in the Jazz Department at the University of Lucerne.

THOMAS LÄHNS – bass
Double bass player Thomas Lähns is a highly distinguished performer of both classical music and jazz. He combines the sophisticated bowing technique of the classical orchestra with the spontaneity of the jazz ensemble. His classical performances include appearances with Heinz Holliger and Peter Eötvös at the Salzburger Festspiele and Schleswig Holstein Music Festival, and regular classical solo performances across Europe and South America. He is one of the few players to perform Hans Werner Henze’s Concerto for Double Bass.

As a teenager his first musical ambition was to play electric bass, inspired by a love of Iron Maiden – until he fell in love with jazz and learnt the double bass. He studied classical music in Basel with Wolfgang Güttler and Botond Kostyak and took masterclasses with Marc Dresser. He is much in demand on the jazz scene, playing in over 100 jazz gigs a year. As co-leader of VEIN Trio, he makes guest appearances with artists including Christoph Stiefel, Johannes Mössinger and Kolsimcha. His approach is in the tradition of Scott LaFaro, Richard Davis, Miroslav Vitous and especially the great exponents of jazz bowing such as Slam Stewart and Major Holley.

FLORIAN ARBENZ – drums
One of Europe’s most versatile and accomplished drummers, Florian Arbenz has an unsurpassed jazz pedigree with the acclaimed Swiss trio VEIN. He got to know jazz through acquaintances such as Kirk Lightsey and Famadou Don Moye, and studied with Ed Thigpen and Steve Smith. He is also a classically trained percussionist, with extensive international orchestral experience, and has performed with Peter Eötvös, György Kurtag and Christoph von Dohnanyi, among others. As a student, he spent six months at Cuba’s University of the Arts, and has maintained an active interest in the international scene ever since, incorporating elements from Asian technique, as well as Afro-Cuban, in his own playing. Florian follows the careers of cutting-edge practitioners such as Chris Dave, and Eric Harland very closely, and hones his own technique with a similarly innovative focus. 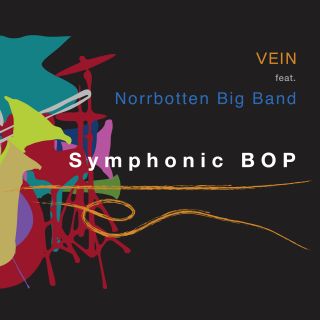 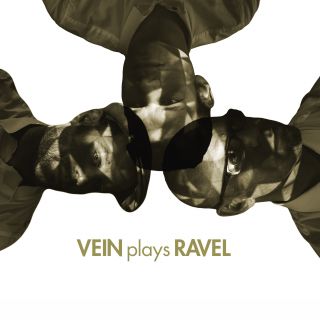 € 14.95
Add to cart
Product is on stock
18-10-2019 Luister
"The Swiss piano trio Vein is known for its adventurous impact. On the Symphonic Bop album, the Swedish Norbotten Big Band forms the colorful and cross-border extension of the trio."
01-10-2019 De Nieuwe Muze
"All examples of contemporary jazz ..."
25-03-2019 Jazzenzo
""Symphonic Bop" is one of the most exciting jazz releases of recent months: the collaboration between VEIN and the Norrbotten Big Band, we want more!"
01-12-2017 Muze - Pianowereld
"These great musicians are completely aligned. They prove that again with their jazz interpretations"
01-11-2017 jazzhalo
"The choice of the repertoire of Maurice Ravel seems from the first note perfectly in accordance with the aesthetics and intent of the trio: give the music of Ravel a new impulse of inspiration, while respecting the language of the French composer, a new direction."
31-10-2017 The Whole Note
"This tribute to the dead, written during World War I, is brought back to life by Vein with unconventional and progressive harmonies."
30-10-2017 JazzFlits
"Precious! Vein knows how to combine two worlds into a beautiful whole."
23-10-2017 Draai Om Je Oren
"An album that is mostly characterized by Guts. You have to dare to make such an iconic piece as the 'Boléro' in this way. If it succeeds and that is cenrtainly the case, you can knock on your chest as trio. So we are looking forward to the next experiment with the classics."
18-10-2017 Rootstime
"Great music and maybe a reason for some to listen to the music of Ravel."
22-09-2017 Trouw
"**** That crystal melodic motif in an elegant question-response game with the ever-running rhythm; ..."
02-09-2017 Jazzenzo
"The soft, smooth sound is pleasant and enjoyable and will not even be lost in busy passages."
01-09-2017
"My recent music is full of jazz influences, said the French composer."
01-09-2017 SWR2
"Although the jazz scene in Switzerland is relatively straightforward, formations can always be played beyond the borders of the country. This is certainly the Trio Vein from Basel"
29-08-2017 SWR2
"A refreshingly intersting recording"
22-08-2017 All About Jazz
"VEIN plays RAVEL sees the trio carefully select eight pieces by Ravel that encompass his various stylistic modes. Using them as a template and translating them into a VEIN-esque musical language, VEIN repeats Ravel's approach some 100 years later"
16-08-2017 Opus Klassiek
"The arrangements can take many forms: the structure of Ravel loaded with jazzy fragments or vice versa"
05-06-2017 Jazzflits
"The beautiful of Vein is that the end result is pure and exciting jazz and continues without even a moment the feeling that classical music is created."