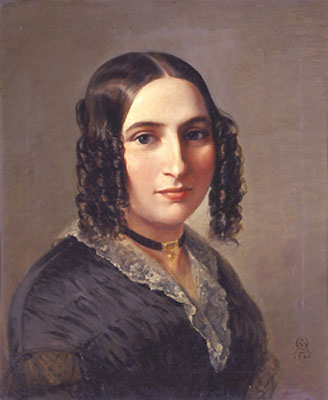 Fanny Mendelssohn, in full Fanny (Cäcilie) Mendelssohn-Bartholdy, married name Fanny Hensel (November 14, 1805, Hamburg, Germany - May 14, 1847, Berlin, Prussia), was a German pianist and composer, the eldest sister and confidante of the composer Felix Mendelssohn. She composed over 460 pieces of music. Her compositions include a piano trio and several books of solo piano pieces and songs. A number of her songs were originally published under her brother's name in his opus 8 and 9 collections. Her piano works are often in the manner of songs, and many carry the name Lieder für das Pianoforte (Songs for the piano, a parallel to Felix's Songs without Words.

Fanny Hensel grew up in a well-situated and highly cultured Berlin family. She and her younger brothers and sister Felix, Rebecca and Paul all received excellent education. The banker Abraham Mendelssohn Bartholdy and his wife Lea were quick to recognise Fanny's exceptional musical talent and, just like her brother Felix, she received instruction from the best music teachers available. In 1816, during a period of several months spent in Paris, the children studied piano with Marie Bigot de Morogues, who was a particular favourite of Haydn's and Beethoven's.

After returning to Berlin they took lessons with the well-known Beethoven interpreter Ludwig Berger. Abraham Mendelssohn hired the conscientious Carl Friedrich Zelter, a friend of Goethe's and the director of the Berliner Singakademie, to teach his children music theory and composition. Fanny soon became known to the Mendelssohn's circle of friends and acquaintances not just as an excellent pianist but also as the composer of lieder and piano pieces. In an obituary written just after Fanny's sudden death, the Berlin music critic Ludwig Rellstab wrote that she had shared "a partnership of talent" with her famous brother and "had achieved a level of musical knowledge which few other artists who have dedicated their lives to music could claim".

While Felix's education included lengthy travels and he was able to try himself as a conductor and pianist and become acquainted with the famous musicians of the times, Fanny was faced with many restrictions. At the age of 14 her father reminded her to concentrate on her future role as a wife and mother. Her musical activities did not reach beyond the bounds of the Mendelssohn's circle: public concerts and the publication of musical works were not deemed to be womanly activities. As Jews who had converted to Protestantism the Mendelssohns were particularly eager to live according to bourgeois convention. Restricted to the domestic realm, the majority of Fanny Hensel's compositions were piano pieces and lieder which could be performed in the evening concerts held at the Mendelssohn's home. Works such as the Piano Quartet written in 1822 remain unusual for her work during this time. In an attempt to make her compositions known beyond the inner circle of family friends, in 1827 and 1830 she found opportunity to publish five lieder and a duet with piano accompaniment under Felix Mendelssohn's name in his Liederheften op. 8 and 9. She made presents of copies of her lieder and piano pieces to friends and acquaintances.

Nevertheless, Fanny Hensel was able to reach at least a small circle of concert-goers by presenting her works in the ‘Sonntagsmusiken’ which were established during the early 1820s. Following the example of Zelter's ‘Freitagsmusiken’, Abraham Mendelssohn hired musicians from the Hofkapelle to play in these concerts which took place at the Mendelssohn's home every other Sunday from 11 a.m. to 2 p.m.. This gave both Felix and Fanny a chance to perform works by earlier and contemporary composers and to try out their own works in a semi-public setting with a hand-picked audience.

In 1829, when Felix left home to embark upon his first extended trip to England, the "Sonntagsmusiken" were not continued. In the spring of 1831 Fanny, who had married Wilhelm Hensel in October 1829, decided to reinstate these concerts which, as reported by Rellstab, were "a musical festival of the most unusual sort, in which meticulous interpretations of classical works of former and current times could be heard and the pleasure was enhanced by the performances or mere presence of the very best Berlin musicians or those from elsewhere who visited our city." Fanny Hensel conducted and accompanied her choir which consisted of about twenty singers giving, joined by instrumentalists who were friends of hers, high-level performances of oratorios, opera arias and chamber music by Bach, Mozart, Beethoven, Weber and Mendelssohn. Here she was also able to make her own works known.

These concerts became increasingly well attended over the years with Fanny presenting her works for piano solo, her lieder, duets, choral songs, the scene Hero and Leander for Soprano and Piano or Orchestra, the Piano Trio which appeared posthumously as op. 2 as well as the Orchestral Ouverture of 1830, for the première of which the Orchestra of the Königstädter Theater was engaged. In addition to the friends and acquaintances who came to the "Sonntagsmusiken", quite a number of famous people attended: the Humboldt brothers, Franz Liszt, Clara Wieck-Schumann, Johanna Kinkel, Heinrich Heine etc. These concerts with which, according to Rellstab, Fanny Hensel "to whom we are much indebted, enriched the artistic life in our town", made up for some of the restrictions she was forced to live with. Conducting such concerts had a positive effect on her work as a composer. In 1831, she composed larger works for soloists, choir and orchestra such as the cantatas Hiob en Lobgesang and Musik für die toten der cholera-epidemie.

In 1839/40 the Hensel family was finally able to fulfil a long-standing wish: they spent a year travelling in Italy. This year was among the happiest in Fanny's life. In Italy she finally received recognition for her work beyond the family circle and became acquainted with various musicians who thought highly of her work and were supportive of her creativity.

The young Charles Gounod, for example, wrote the following in his memories, "Mrs. Hensel was an extremely learned musician and played the piano very well. Despite her small, slight figure she was a woman of excellent intellect and full of energy that could be read in her deep, fiery eyes. Along with all this she was an extremely talented pianist...". After returning to Berlin, Fanny composed her most important piano work, the biographical cycle Das Jahr (1841). During the epoch in which she lived Fanny was the only composer to use the idea of depicting each of the twelve months of the year musically.

It was only in the last year of her life that Fanny, encouraged by the family friend Robert von Keudall and despite her brother's explicit objections, found the courage to start systematically having her works printed. Thus, in 1846 lieder, a cappella choral songs and piano pieces appeared with the opus numbers 1 to 7.

She was not to carry through further publications of her works: Fanny Hensel died of a stroke suffered during a rehearsal for one of her "Sonntagsmusiken" on May 14th, 1847.
Following the death of his sister, Felix Mendelssohn fell into a deep depression; he died suddenly on November 4th of the same year. Upon the request of his brother-in-law Wilhelm Hensel, he had arranged for several of Fanny's further works to be published. They appeared in 1850. In 1987, the Furore Verlag began publishing those of her works which had remained unprinted. Today Fanny Hensel born Mendelssohn is considered to be one of the most important composers of the romantic era. 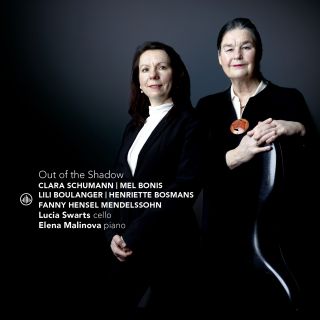 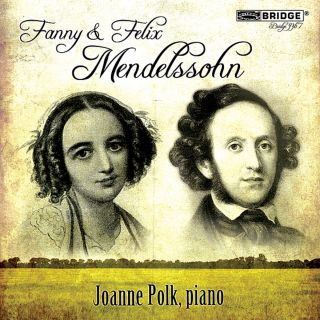