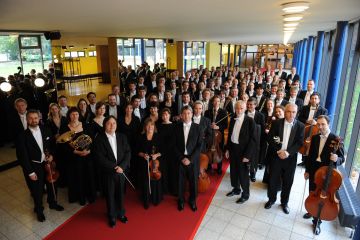 The Beethoven Orchestra's current programme is clear evidence that traditional and modern works are not in contradiction to one another. In concerts in Bonn, elsewhere in Germany and abroad, this ensemble is taking the reputation of the city of Bonn out into the world in the spirit of Beethoven's music. Performing unusual programmes of works is indeed one of the orchestra's main aims in its artistic activities.
What Richard Strauss began as one of the orchestra’s first guest conductors was later continued by Max Reger and conductors such as Sergiu Celibidache, Günter Wand, and Dennis Russell Davies: they never failed to elicit new tone colors from the Beethoven Orchestra and set important impulses in its development into a dynamically agile ensemble that was and is acclaimed as an outstanding orchestra in the music press both then and now. As a result, the Beethoven Orchestra of Bonn went on to earn the greatest recognition in the international music world.
After five years of cooperation with Roman Kofman and in quest of constant new challenges, Stefan Blunier became general music director in the 2008/09 season. With him the repertoire has undergone impressive expansion, and, completely in harmony with the idea of eternal change, the orchestra will also take the public along on a journey full of discoveries and surprises.
In 2009 the Beethoven Orchestra of Bonn was awarded the ECHO Klassik in the category „Special Jury Award for the Fostering of Young Talent in Classical Music“ in recognition of its educational programme. The courses on offer for keen young people from Bonn have been constantly expanded since 2008. Thomas Honickel, the Beethoven Orchestra's concert programme educational consultant, guarantees to fulfil both the desire for musical education and the need to make such programmes a source of entertainment and creativity.
The Beethoven Orchestra of Bonn numbers among the top-class German orchestras. He assumes important artistic functions in conjunction with the International Beethoven Festivals in Bonn and is known far beyond Bonn’s borders as one of the leading German orchestral formations.