Bach Concentus was founded in 2007 by Ewald Demeyere. This orchestra, playing period instruments, devotes itself to the instrumental and vocal repertoire of the Baroque and Classical periods, specialising in works by the Bach dynasty.
Historical authenticity, applied to all the parameters of performance, is the keystone of Bach Concentus. In order to get closest to the original sound concept and performance practice of Baroque and Classical music, Bach Concentus calls exclusively on the use of historical instruments, both for the strings and the wind. The core players of Bach Concentus consist of principally Belgian renowned specialists in the field of historical performance practice. An essential aspect of this approach consists of returning its central rôle to the basso continuo. Despite these crucial aspects of a coherent and historical interpretation of Baroque and Classical music, Bach Concentus aims never to be academic or dogmatic; its respect for and constant application of the art of rhetoric contributes to a spontaneous, lively and dynamic communication with the audience. 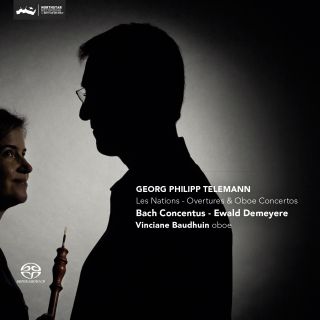 Georg Philipp Telemann
€ 20.95
Add to cart
Product is on stock
04-01-2016 Luister
"''I could say something about the con brio: at the beginning of the Nations you can't deny that a little bit more colour in the dynamics and finishing the trillers, that would make it more exiting: now it's quite set and straight, and the great hoboplayer could have played in more long notes and let us hear some more vibrato.''"
13-04-2015 rbb Kulturradio
""The small string orchestra plays very concentrated and well balanced."
4 stars"