Blinded by racial fanatism, the Nazis not only murdered or sent into exile Jewish composers as part of an insane musical policy, they also stopped the careers of promising artists in a way that any memory of them was almost completely extinguished. One of such tragic case was the destiny of composer Norbert von Hannenheim. He was born in 1898 in Hermannstadt, Transylvania (now Sibiu, Romania). He showed musical talent from an early age, but it was only at the age of 24 that he began regular studies at the Leipzig Conservatory with Paul Graener, a well-known composer of his time. The first important award that he won was the George Enescu Prize in 1925, after which he continued his studies; first in Budapest with Alexander Jemnitz and finally in the class of Arnold Schönberg at the Academy of the Arts in Berlin. Schönberg thought of him as “one of the most interesting and talented pupils... his talent, his seriousness, his productivity are certainly exceptional, and I think, confidently, that he will have a word to say in the development of music and that his work will carry through.” In 1932, Hannenheim won the Felix Mendelssohn Bartholdy Prize. His second piano concerto with small orchestra was very successful and broadcasted internationally. Soon after he started to be well known abroad, the Nazis destroyed his artistic future. Hannenheim was German, but as he composed atonal music, he came under the curse of so-called “Entartete Musik” („degenerated music“). As a student he had already lived in very poor conditions, hungry for days. But now, banned from composing, his existence was practically destroyed. He survived daily life by copying and editing scores. Eventually, he was forced by these circumstances to indirectly assist Nazi ideology by making arrangements of German folk songs. By 1933, no publisher dared to print his music, which meant his complete works existed only as manuscripts. During the war, his few friends advised him to deposit a big suitcase full of compositions at the Commerzbank in Berlin. This office in the Tauentzienstrasse was bombed in November 1943. No one knows what happened to the suitcase. If it wasn’t destroyed in that bombing, it was likely stolen or disposed of with the rubble after the bombing. With his entire catalog destroyed, his life once again turned in a tragic direction. After suffering a schizophrenic attack, he was committed to the “Wittenauer Heilanstalten Berlin-Reinickendorf” mental institution on July 6, 1944. A month later, on August 30, 1944, he was deported to a euthanasia center in Obrawalde near Meseritz (today Miedzyrzecz, Poland) approximately 75 km away from Frankfurt/Oder.

Hannenheim survived the end of the war and died on September 29, 1945, in Obrawalde. The life of an atonal composer who lived in poverty only for his devotion to art, and due to the unpredictable games of life finished in insanity, almost unmistakably resembles the revival of Thomas Mann’s character Adrian Leverkühn. His biography could have caused a stir of interest in his oeuvre, but it took more than 50 years until his rediscovery. The musical world was amazed when Ludwig Holtmeier, a musicologist from the Freiburg Musikhochschule, published his article in 1998 about the „Berlin School“ of Arnold Schönberg. Did it oppose the „Viennese School“ of Arnold Schönberg, Alban Berg and Anton Weber? Who were these names which no one had so far heard about? It is generally believed that artistic value gets through in spite of unfavorable facts. But what if a bomb destroys an artist’s entire catalog which was fully recognized during his lifetime? By pure chance, some of his works have been rediscovered. The source was a festival in 2001 called „Berliner Schule – Arnold Schönbergs Meisterschüler an der Preußischen Akademie der Künste“ in Berlin, where some of Hannenheim’s works were highlighted. Of about 240 works registered at STAGMA (the precursor of GEMA) and reviewed in known articles, some 45 works (or 19%) have been rediscovered. The already known five works for viola represent a large part of it. In around 1936, Hannenheim showed his first Viola Sonata to Emil Seiler (1906-1998) by chance. He liked it so much that Hannenheim immediately wrote a second one for him, as he liked to write several pieces for the same instrument nearly simultaneously.

Schönberg did attribute him with remarkable productivity. In the estate of Emil Seiler were conserved two sonatas and a four movement suite. The „3 Bratschenstücke“, which do not have a title in the manuscript, strangely came to light in the estate of Isolde von Geyer, widow of the painter Hans von Geyer zu Lauf, where they were identified as Hannenheim’s works by Prof. Holtmeier. Two expert testimonies of the „Amt Rosenberg“ regarding the first sonata and the suite did survive. This surveillance office propagated the cultural policy of the Nazi regime. The first report dated February 3, 1936, characterizes Hannenheim as „a musician with remarkable counterpoint skills but considerable intellectualizing characteristics, who develops performing energies through an overbred harmonic. The talent is obvious.“ The „Bratschenstücke are too ramified in their lines and stay too academic to give the impression of a lively expression of true contemporary musical emotion“. At least the standard reproach of „decadent cultural bolshevism” was missing. The second report stays to the point: „it is constructive music which individualizes each tone and refuses any functional interference.“ Only themes and rhythms act as coherent powers. 1. Construction and ‘thematics’: Hannenheim did sometimes compose in a strict dodecaphonic style (12-tone), but in the viola works he developed the principle of composing with a tone row in an original way. He leads not from an „only“ dodecaphonic tone row but from a melody treated like a tone row. In the first movement of the Viola Sonata the row has 54 tones, in the first movement of the suite 30. Hannenheim replaces the „abstract row“ by a long, shaped „theme“ which, when being repeated, changes only rhythmically and stabilizes the structure of the movement like a cantus firmus. 2. Rhythm: Hannenheim loves concise, often dancing rhythms, meters who change in pairs like 2/4+3/4, 4/4+3/4, which could easily be united as 5/4 or 7/4. It is not clear if he was inspired rather by Romanian folk music or Bartok’s rhythms. In any case, his music owes its vitality mostly to its lively rhythms. 3. Harmony: Hannenheim composes tonally very unconventionally. His spectrum goes from sharp atonal dissonances and massive six-tone chords in the first Viola Sonata to C-major sound surface in the second sonata, where in all three movements his principle is to confront a C-major chord with an F sharp major chord (the augmented fourth) in order to create an opposite pole. Normally a strict dodecaphonist shies away from any chord, but Hannenheim enthusiastically takes conventional chords in the ‘heiter und ironisch’ of the ‘3 Bratschenstücke’, where he begins in E major and A major. In spite of any constructivism, he preserves his natural sense of harmony. Hannenheim has a similar background in folk music as Bela Bartok. He was a prize student of Arnold Schönberg and, it is said, the only one capable of unabashedly contradicting his master. This connection between grounded musicality and authentically constructive thinking is rather uncommon. One should remember the name Hannenheim. 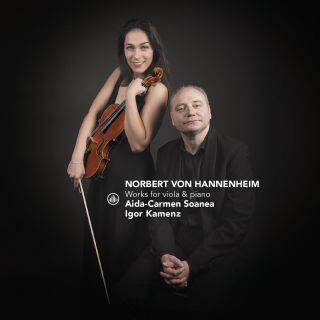 Norbert von Hannenheim
€ 19.95
Add to cart
Product is on stock