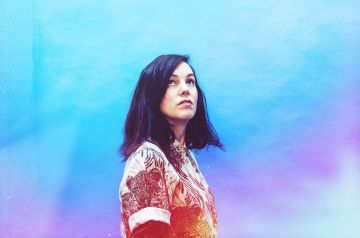 Anna Meredith is a composer, producer and performer of both acoustic and electronic music.  Her sound is frequently described as ‘uncategorisable’ and ‘genre-defying’ and straddles the different worlds of contemporary classical, art pop, electronica, ambient installations and experimental rock.

Her music has been performed everywhere from the BBC Last Night of the Proms to flashmob body-percussion performances in the M6 Services, PRADA, Chloe & Fendi fashion campaigns, Apple adverts, films, installations and documentaries, pop festivals, clubs and classical concert halls worldwide and broadcast on Radio 1, 2, 3, 4 & 6.

She collaborates closely with her band, which has a line-up of Anna on clarinet and electronics, plus cello (Maddie Cutter), electric guitar (Jack Ross), tuba (Tom Kelly) and drums (Sam Wilson).

Anna is also a regular presenter for BBC Radio3 and 6Music and a radio and TV guest, judge and panel member on numerous shows .