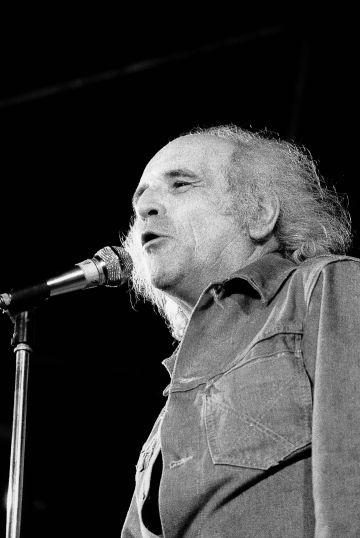 Although little known in English speaking countries, Leo Ferre (1916-1993) is a monument of French chanson, revered throughout the francophone world. A singer, songwriter, author, composer, and even orchestra conductor, he is mostly remembered for songs like "Avec le Temps," "Les Anarchistes," and "Jolie Mome." His career began in the cabaret and took him through four decades and a number of styles, but his best material and his popularity peak happened in the '60s and early '70s, as the generation of May '68 adopted him as an anarchist figure.

Leo Ferre was born and raised in the principality of Monaco, between France and Italy. Throughout his life, the artist would live and work in the two countries alternately, even recording a few songs in Italian. He completed his college studies in 1934 in Rome. Since his father refused to let him go to the music conservatory, he went to Paris for studies in law, earning a diploma in Political Sciences in 1939. The second World War dragged him into the military and upon Paris' capitulation he fled back to Monaco. He got married for the first time in 1943, began to work at Radio Monte-Carlo, and wrote his first songs.

After the Liberation (1945) Ferre gave his first performances in Parisian cabarets, encouraged by Charles Trenet, Edith Piaf, and Juliette Greco who would sing many of his songs. His first wife divorced him in 1950. Shortly after, he met Madeleine Rabereau, who would become his second wife and have a decisive influence on his career, pushing him constantly forward. He cut his first 78 rpms for Le Chant du Monde and wrote his first piece of "serious" music, the oratorio "La Chanson du Mal-Aime." In 1953, Ferre was signed by the record label Odeon and recorded his first LP which includes "Paris-Canaille."

In the late '50s and early '60s he recorded a series of albums devoted to French poets, interspersed with LPs of his own songs. His lyrics alternate between love topics and a social commentary that grows more and more bitter: "Thank You Satan," "Mon General" (against Charles De Gaulle), "Ni Dieu, Ni Maitre." When the events of May '68 take place, Ferre is at a popular and artistic peak. Now forever associated to the Anarchist movement, he let himself be transported by the younger generation. He abandoned the over-emphatic, theatrical style of singing that was also Jacques Brel's trademark, recorded and toured with the rock group Zoo, and included monologues in his concerts. In October 1970 came out the single "Avec le Temps." It became his signature song.

Starting in 1975, Ferre attempted a career in classical music, conducting orchestras for his works and classics (he recorded works by Beethoven and Ravel). For the next decade he continued to release albums and tour, but his prime had passed. His writings and television appearances were feeding his popularity more than his musical production of the time, and by 1985 he had considerably slowed down his activities. He was preparing a come back to the stage when illness struck in 1992. He died in July 1993 at age 77.