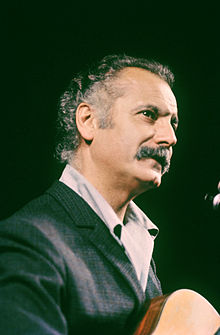 George Brassens, (born October 22, 1921, Sète, France—died October 30, 1981, Sète), French singer and songwriter. One of the most-celebrated French chansonniers (cabaret singers) of the 20th century, Brassens held a unique place in the affections of the French public and, during a career of nearly 30 years, sold more than 20 million records.

Brassens’s songs, which won the poetry prize of the Académie Française in 1967, belonged to a tradition reaching back to the medieval jongleurs (professional storytellers and entertainers). They combined bawdy humour, tenderness, and contempt for the self-importance of bigots and authority figures. After arriving in Paris in 1940, Brassens worked in the Renault car factory and was conscripted for war work in Germany. While off duty back in France, Brassens deserted and was given refuge by his aunt’s neighbour, Jeanne Planche, to whom he dedicated many of his songs. In 1952 Brassens was discovered by Jacques Grello and made his debut in a nightclub owned by the singer Patachou. His warm voice and emphatic guitar accompaniment were heard at the Olympia, the Alhambra, and the Palais de Chaillot, but he was at his best in his regular appearances in the unpretentious surroundings of the Bobino music hall.